Intel is set to launch its 13th-gen Core “Raptor Lake” chips this fall, but details about the next next-gen processor are already starting to emerge.

Igor’s Lab has published what appears to be leaked Intel documentation showing some of the features coming to Intel’s 14th-gen Core processors based on “Meteor Lake” architecture, which are expected to launch in the second half of 2023. 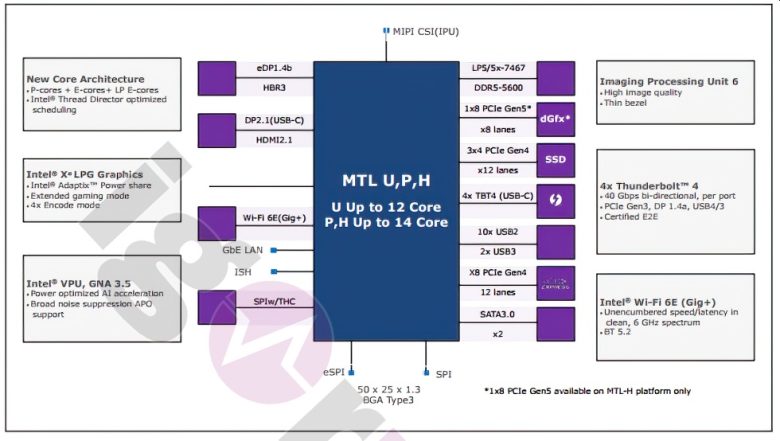 The images provide details about Meteor Lake-U, -P, and -H series chips, which will likely fall in the 15W, 28W, and 45W power ranges, respectively.

Like the current 12th-gen Alder Lake processors, the new chips will feature a hybrid architecture that combines different types of CPU cores. But while Alder Lake chips combine Efficiency and Performance cores, it looks like Intel plans to introduce Low Power Efficiency cores with Meteor Lake, which could lead to reduced power consumption while idle or while performing less demanding tasks. And that could lead to longer battery life.

Meteor Lake-U chips are said to feature up to 12 CPU cores, while -P and -H chips will support up to 14 cores (6 Performance + 8 Efficiency). It’s unclear if the new LP E-cores are included in those 8 Efficiency cores or if, as CNX Software guesses, they could be a new type of co-processor that’s not included in that list.

Intel also appears to be planning to upgrade its integrated graphics, with Intel Iris Xe LPG graphics featuring up to 128 execution units (current chips with Iris Xe graphics tend to top out at 96eu).

Other features include support for:

Meteor Lake chips will be Intel’s first manufacturing using a 7nm process (which Intel is calling Intel 4 for marketing purposes), and they’re expected to support Windows, Linux, and Chrome OS.

You can find more details at Igor’s Lab.