Intel launched the Core M line of processors a few years ago, to offer a low-power chip that offers significantly better performance than the company’s Atom processors. Core M chips can be used in fanless computers and/or offer opportunities for long battery life due to their low power consumption.

When Intel launched its 7th-gen Core “Kaby Lake” chips, the company only had a single model with the Core M name: the Core M3-7Y30. It used Core i5 and Core i7 names for more powerful variations of the chip, to indicate that the higher-end models offered a significant performance boost. 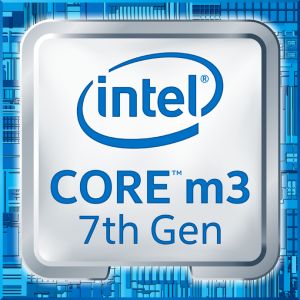 Both are 4.5 watt, dual-core processors. The TDP can be adjusted up to 7 watts or down to 3.75 watts for higher performance or improved energy efficiency, depending on a system builder’s needs.

Here’s the difference: both chips support burst speeds that are much higher than the base clock speed, allowing them to operate at higher frequencies for a short period of time (which is part of why these chips offer performance that’s closer to what you’d expect from a Core i3 chip than an Atom or Celeron processor).

Both chips support up to 16GB of memory and feature Intel HD 615 graphics with base clock speeds of 300 MHz and top speeds of 900 MHz.

In related news, it looks like Intel also added a new low-power Core i5 chip to its lineup earlier this year. The Core i5-7Y57 processor is a close relative to the Core M3 Kaby Lake chips, but it’s even closer to the Core i5-7Y54 processor that launched last year.

In this case, the only real difference is the maximum burst speed, which has gone up from 3.2 GHz to 3.3 GHz.

2 replies on “Intel launches a slightly faster Core M3 Kaby Lake CPU (and a new 4.5 watt Core i5 chip too)”