The first computers powered by Raptor Lake mobile chips should arrive in the coming months with base power levels ranging from around 15 watts for thin and light machines to 55 watts for gaming laptops and mobile workstation-class computers.

Like Intel’s 12th-gen “Alder Lake” processors, the new 13th-gen chips feature a hybrid architecture that combines Performance and Efficiency CPU cores on a single chip, along with the latest Intel Xe integrated graphics. But this year’s chips kick things up a notch, with twice as many Efficiency cores in many models, and support for higher single-core CPU frequencies thanks to Intel’s new Raptor Cove architecture for Performance cores. The Efficiency cores run at the same frequency as Intel’s older Skylake CPU cores, but use less power to do so. 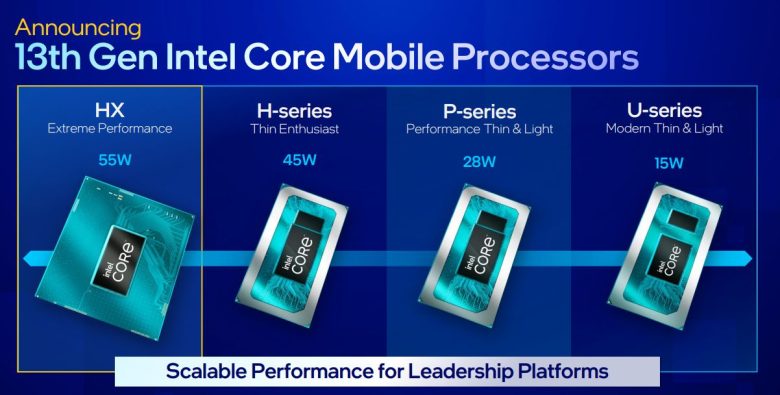 Intel doesn’t have any 9W or lower power chips as part of its 13th-gen launch lineup, but the company is also launching the new Alder Lake-N line of 6W to 15W processors for lower-cost laptops with starting prices under $400.

In a lot of ways these 55W processors are basically desktop chips that have been redesigned for laptops. They’re not socketed like a typical desktop chip, so they’ll be soldered to your laptop or mini PC motherboard. And they use a little less power than most Raptor Lake desktop chips.

But they pack a lot of horsepower into a mobile design, with support for up to 24 cores and 32 threads (with 8 Raptor Cove Performance cores with hyperthreading and 16 single-threaded Efficiency cores). And Intel says its Core i9-13950HX processor can hit single-core speeds as high as 5.6 GHz. All of Intel’s HX-series chips are also unlocked, which means advanced users can overclock it. Just keep in mind that while these laptop-class chips have a base power consumption level of 55 watts, they can also consume up to 157 watts under heavy load.

The chips are manufactured using an Intel 7 processor with the company’s 3rd-gen SuperFin technology, and features increased L2 and L3 cache sizes, which Intel says will enable lower latency gaming.

Other features include support for up to 128GB of DDR5-5600 or DDR4-3200 memory, PCIe Gen 5 and Gen 4, support for up to four SSDs, up to two Thunderbolt displays, and Intel Killer WiFi 6E and Bluetooth LE Audio.

Overall, Intel is promising big performance gains, especially in multi-threaded workloads. For example, when compared with an Intel Core i9-12900HX chip, a Core i9-13950HX should offer:

Intel says its 13th-gen HX chips use the same package as its 12th-gen HX processors, which makes it easy for laptop makers to upgrade existing designs with the latest processor. The company expects more than 60 designs featuring these processors to hit the market in the coming year.

Here are key specs for some of Intel’s 13th-gen HX-series chips:

Laptops and mini PCs with these 45-watt, 28-watt, and 15-watt chips are expected to begin shipping in the first quarter of 2023 and Intel says we can expect models with up to 14 cores and 24 threads (6 Performance + 8 Efficiency cores).

When compared with their 12th-gen counterparts, these new chips will support higher clock speeds, add support for PCIe Gen 5 (it’s still optional, and PC makers can continue to opt for PCIe Gen 4), and bring efficiency improvements for longer battery life – Intel says laptops based on the latest Intel Evo designs should get up to 30 minutes more real-world battery life than a model with an equivalent 12th-gen processor.

Intel is also offering PC makers the option of including an Intel Movidius VPU (vision processing unit) for laptops to bring support for hardware-accelerated video effects including background blur during video calls. This sounds like Intel’s answer to the AI-based photography features that are included in some Windows-on-Snapdragon devices like the Microsoft Surface Pro 9 with 5G.

At this point Intel says its Movidius VPU is primarily aimed at developers and early adopters. It will only be available on a “very select” number of systems at launch, but it could pave the way for more widespread adoption when Intel launches its 14th-gen “Meteor Lake” chips in the future. 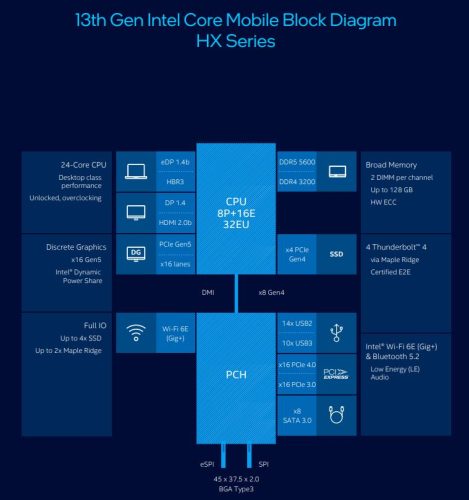 In terms of real-world performance, Intel says a Core i9-13900HK chip should offer up to 10% better performance and an 11% increase in responsiveness when compared with its 12th-gen counterpart. That’s not nearly as impressive as the gains you get from the HX series, so it’s unlikely to prompt anyone who bought a 2021 laptop with a 45W Intel chip to upgrade this year. But it should provide a nice speed boost for anyone upgrading from an older machine.

Here are key specs for some of Intel’s 13th-gen H-series chips:

Intel isn’t providing as many details about its more energy-efficient chips yet, but the company does say that we can expect more than 250 systems powered by these chips to launch in the first half of 2023.

Designed for thin and light laptops, the chips are designed to operate at lower power envelopes than the H and HX series, and will most likely feature fewer CPU cores and lower frequencies. But Intel is giving the Iris Xe integrated graphics a boost with support for XeSS AI upscaling support, a feature that’s been borrowed from the company’s discrete graphics solutions.

Intel says you can expect 35% faster frame rates in games that support XeSS upscaling. The GPU also now supports an “endurance gaming frame pacing feature” which could help extend battery life while gaming by reducing frame rates to cut down on power usage.

Here are some key specs for some of Intel’s 13th-gen Core P and U-series chips: 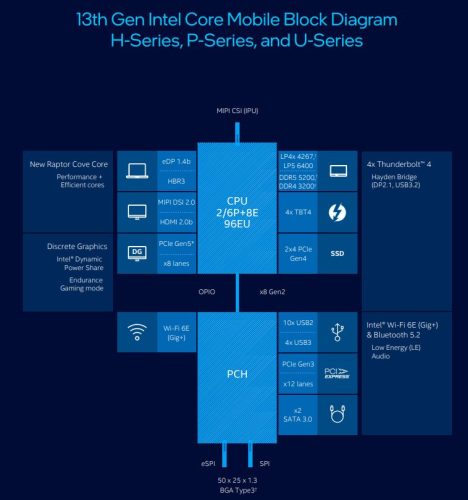 Along with new processors, Intel is updating its Intel Evo certification program, which is designed to ensure that laptops with the Evo logo meet specific performance and user experience targets. 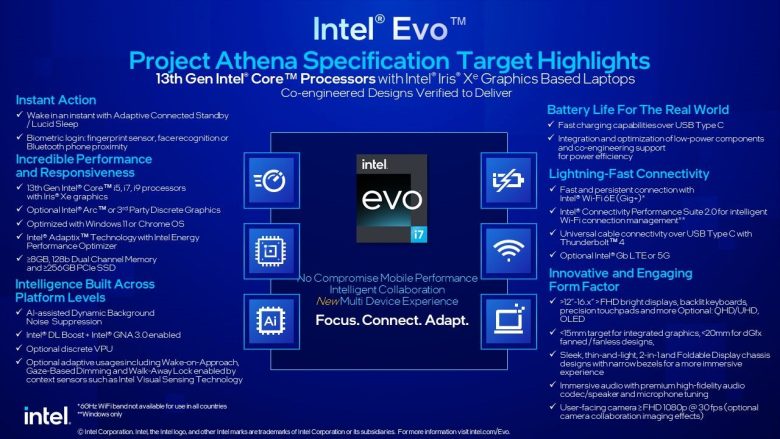 Among other things, the latest version promises around 30 minutes longer battery life than models with 12th-gen chips, 1080p or higher-resolution webcams with AI-assisted background noise suppression, and Intel’s new Unison software for pairing your phone with a PC for sharing files, notifications, calls, and messages between your devices.

Intel says it continues to prioritize features like instant wake-from-sleep and fast charging (plugging in for 30 minutes should give you four hours of battery life). The company is also adding another battery test to its certification process – in addition to “all day” battery life for mixed usage, Intel says systems should currently offer 4-5 hours of battery life during continuous Zoom or Microsoft Teams video conferencing meetings. Intel hopes to extend that time in the future.