Intel’s Atom family  of low-power processors first came to market as a line of chips for inexpensive netbooks and other laptops. In recent years Intel produced Atom chips aimed at tablets and even smartphones… but having failed to find a profitable niche in that space, Intel scrapped its Atom chips for mobile devices earlier this year.

But that doesn’t mean Atom is dead. Instead, the company has been focusing on the Internet of Things space. And now Intel has unveiled one of the most powerful Atom chips to date. 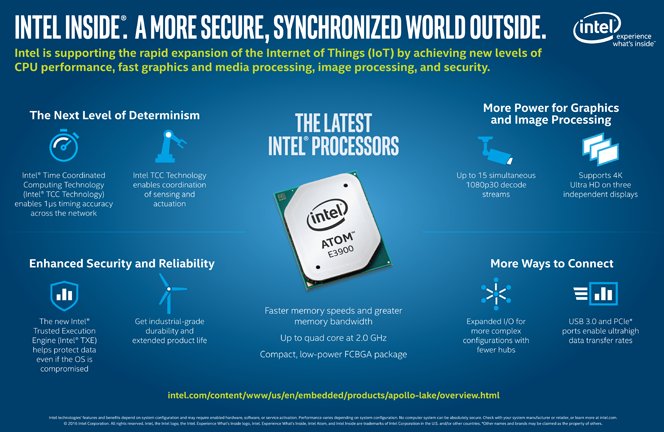 Since the chips are designed for connected devices such as video surveillance systems, in-vehicle computers, and other IoT products. They don’t need to be as energy-efficient as the company’s earlier Atom chips since they aren’t expected to show up in smartphones, so Intel’s E3900 series chips have TDP ratings of 6 watts to 12 watts. But they also include new features for security and connectivity.

I’ll probably stop paying attention to developments in this space eventually, since Liliputing generally covers mobile tech aimed at consumers, and it increasingly looks like Intel’s vision for the future of Atom included embedded applications for industrial and commercial use. Eventually we may see the technology in smart cars and other items aimed at consumers, but I don’t own a car, so I have a hard time getting excited about smart automotive systems.

That said, it is interesting to see how the chips that powered early netbooks have evolved into an entirely new product category.

Each chip is a 14nm processor with support for up to 8GB of RAM, the ability to work with cameras that can capture 13MP still pictures and 1080p/60fps video, or output 4K video at 60 Hz on up to 3 displays at once.