After launching two sets of 10th-gen chips aimed at thin and light laptops in 2019, Intel is expanding its 10th-gen family with a new set of 45 watt Comet Lake H-series processors aimed at high-performance notebooks and compact desktops.

Like the Comet Lake-U series, these chips are still 14nm processors. But Intel has ramped up the clock speeds and core counts.

The top-of-the-line Intel Core i9-10980HK processor is an 8-core, 16-thread chip with support for speeds up to 5.3 GHz. In fact, all of the new Core i7 or higher Comet Lake-H chips have turbo boost speeds of 5 GHz or higher.

Laptops powered by the new chips should start shipping this month… just in time to take on systems powered by rival AMD’s new Ryzen 4000 H-series chips. 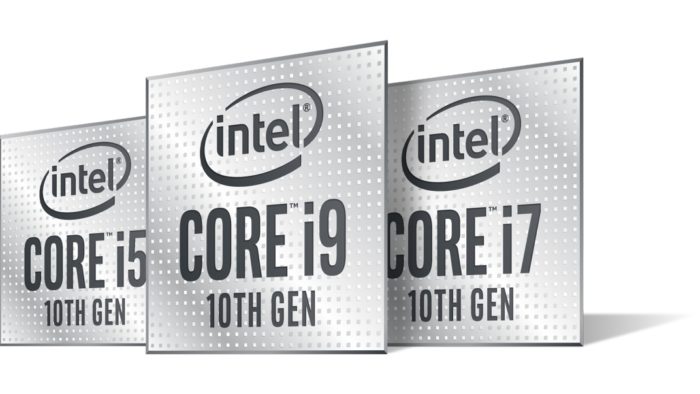 AMD has long played second fiddle to Intel in the laptop space. But the company has been playing catch up, and in a lot of ways the company’s new Ryzen 4000 chips look like they may have leapfrogged Intel’s offerings.

Maybe that’s why Intel is focusing on single-core performance with support for boost speeds up to 5.3 GHz, something that AMD’s laptop chips have yet to achieve. 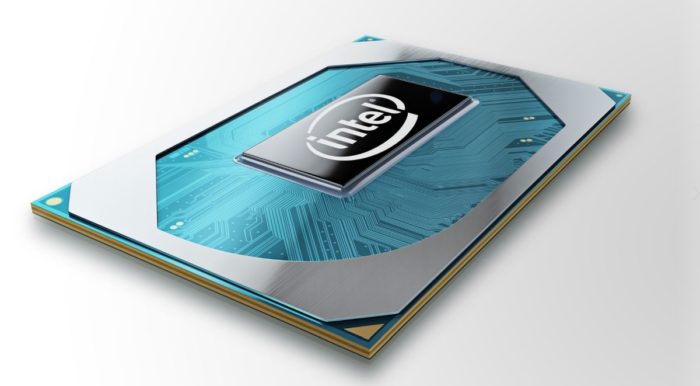 The company says we can expect to see over 100 new computers with Comet Lake H-series processors this year including designs from Acer, Asus, Dell,Gigabyte, HP, Lenovo, MSI, and Razer. 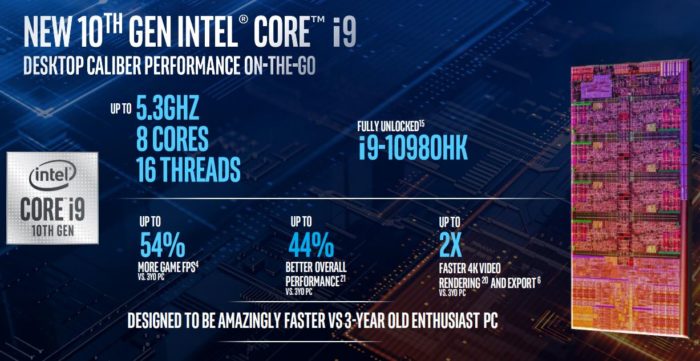 For example, the Core i9-10980HK is said to offers up to 2X the video rendering performance, or up to 54-percent better gaming performance than a Core i7-7820HK processor from 2017.

On the one hand, it makes sense to compare your new chip to a 3-year-old processor, since most folks probably aren’t thinking to upgrade to a newer, more powerful laptop until year three or so. On the other hand, it also seems like a strategy for showing a bigger performance boost than you’d see if you were making a comparison with a 2019 chip like the Core i9-9980HK (a 2.4 GHz, 8-core chip with max turbo speeds up to 5 GHz).

At least the new processors should support slightly faster RAM.

One thing that’s not changing? The integrated graphics technology — we’re still looking at Intel UHD graphics. But since these chips are typically found in notebooks or mini desktops with discrete graphics, the absence of Iris Plus graphics is easy to forgive.

Intel also notes that there haven’t been any significant generation-over-generation changes in energy efficiency. But the company says we should still see new laptops with longer battery life, slimmer designs, and other improvements thanks to the work of OEMs who have found ways to improve thermals and power consumption.

You can check out a full list of the new 10th-gen H-series chips below, but one more that I want to single out is the Intel Core i7-10750H, which Intel suggests will likely show up in the bulk of the laptops in this category. It’s more of a mainstream chip than the Core i9-10980HK, but still represents a step up from its predecessors in terms of CPU frequency.

That should bring a bit of a performance boost for some activities… but I wouldn’t expect it to be huge. The chip looks a bit better when compared with an older processor though. 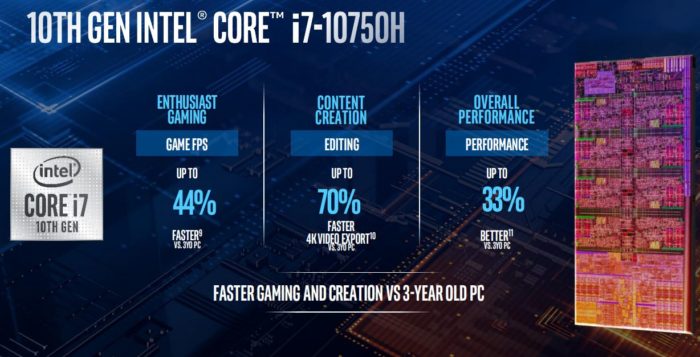 Update 9/16/2020: Intel has added several news chips to the Come Lake-H family. The table below has been updated with the new models.

Here are all of the Comet Lake H chips announced to date.