Intel’s 7th-Gen Core processor family for laptops can be divided into two categories: there are 15 watt Kaby Lake-U series chips that offer higher performance, and 4.5 watt Kaby Lake-Y chips that are designed for use in thin and light computer, often with fanless designs.

For the past few chip generations, Intel has branded its Y series processors as “Core M,” but with the introduction of 7th-gen “Kaby Lake” chips, the company took a different approach. There’s a 1 GHz Core m3 chip, but other Y series processors include models with Core i5 and Core i7 branding.

The new names suggest the Core i5 and Core i7 models will offer the kind of performance you’d expect from a more powerful chip. But is that what you really get? I’m working on a review of an Acer Swift 7 notebook with a Core i5-7Y75 processor, and while it’ll be a little while before I have a full review, I wanted to share some initial performance benchmarks. 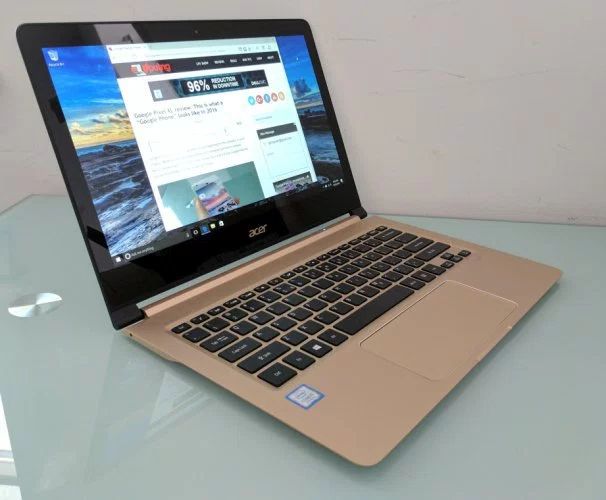 Some folks have criticized Intel’s new naming convention, suggesting it’ll confuse computer shoppers. Intel’s response is basically that a) the old names were confusing and b) Y series chips have gotten so good that you might not really see much difference anyway.

In terms of day-to-day performance, the Swift 7 feels plenty fast. The notebook has no problems running software for editing documents or images, streaming HD video, or even handling some gaming tasks. It also multitasks like a champ.

Some of that is surely due to the computer’s 8GB of RAM and relatively zippy solid state drive. But the processor seems capable of holding its own.

But if you’re wondering how it stacks up against other recent processors? That’s a slightly different story.

I ran a series of tests to measure CPU and graphics performance, among other things. Generally speaking, the Acer Swift 7 is much faster than the Asus Zenbook UX305 laptop with a 5th-gen Core M-5Y10 Broadwell processor I reviewed about a year and a half ago.

But compare it with any other 5th or 6th-gen Core i5 or faster processor, and it’s pretty clear the Core i5-7Y54 can’t quite keep up.

The Kaby lake chip does have Intel’s latest graphics architecture, which helps it out in some situations. For example, check out the results of this Handbrake video encoding test: 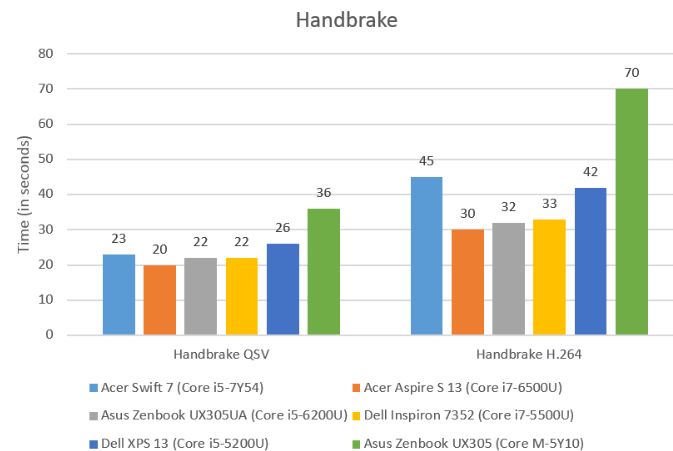 The QSV results show what happens when you leverage Intel’s QuickSync technology, which uses the processor’s integrated GPU to speed up video encoding. The Acer Swift 7 was able to complete the task almost as quickly as computers with Core i5 Skylake chips.

But the H.264 results show that without leveraging the GPU, the Swift 7 was one of the slowest computers with a Core i5 chip that I’ve tested in the past few years.

Here are results from a few other tests, including PCMark, 3DMark, and the Street Fighter IV benchmark (which is getting a bit old… but which I included because it’s interesting how the scores are virtually identical for most of the systems tested except for the Zenbook UX305 with the older Core M chip).

Nearly across the board, it’s pretty clear that the Core i5-7Y54 chip isn’t as fast as other recent chips with Core i5 branding. But it’s not that much slower… and offers performance that’s far above what you’d expect from an Intel Atom, Celeron, or Pentium chip based on Cherry Trail or Braswell architecture (I haven’t had a chance to test any new Apollo Lake chips yet, so I can’t make any comparisons there).

More importantly, it allows for thin, fanless systems like the Acer Swift 7. The laptop measures just 0.4 inches thick, weighs just 2.5 pounds, and has a fanless design, which means it runs silently.

Acer also says the laptop should get long battery life from a relatively small 2,770 mAh battery. I’ll have more notes about real-world battery life after I’ve had more time to test the laptop, but Acer says the notebook should run for up to 9 hours on a charge.