Intel’s 7th-gen Core processors are already shipping to laptop makers, and Intel says we can expect to start seeing notebooks that use the chips this fall. So far Intel hasn’t shared a lot of details about its Kaby Lake chips, other than the fact that they’re based on a 14nm design.

But some details have already started to leak, giving us a little idea of what to expect from Intel’s new laptop chips. 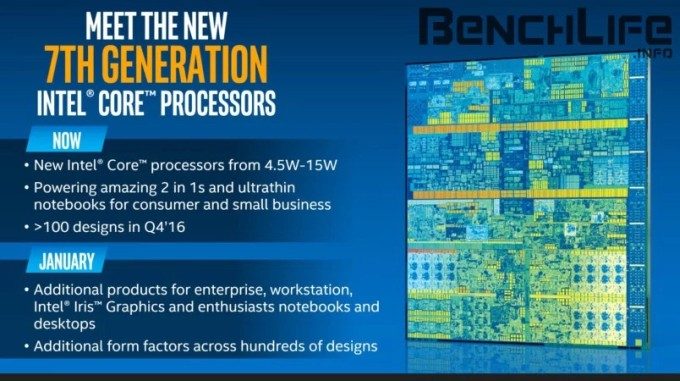 Benchlife.info has published slides showing that more than 100 laptops and 2-in-1 tablets with Kaby Lake chips are scheduled to launch in the fourth quarter of 2016, and that they’ll feature chips using between 4.5 watts and 15 watts, suggesting we’ll see Core M, Core i3, Core i5, and Core i7 models.

The slides also suggest that a 15 watt Intel Core i7-7500U Kaby Lake processor will offer around 12 to 19 percent better performance than a Core i7-6500U Skylake chip, depending on what you’re using the computer for… although it’s worth noting that the Kaby Lake chip can run at up to 3.5 GHz, compared with top speeds of 3.1 GHz for the Skylake model. So the improved performance might come at the cost of battery life unless Intel has also made significant improvements to energy efficiency.

These are all 15 watt dual-core processors with Intel HD 620 graphics, but Notebook Check says there’s also evidence that Intel will offer quad-core U-series chips in late 2017. Up until now  Intel’s “ultra low voltage” or ULV chips have all been dual-core processors, with quad-core laptop chips restricted to the higher-performance H series.