Intel’s 2013 processor lineup is already notable for the strides the chip maker has made in reducing power consumption — especially in the company’s 4th-generation Core processors, also known as “Haswell.” Some of those chips are designed to use as little as 6 watts of power.

Now Intel’s going even lower with a new limited edition chip that will use as little as 4.5 watts, making it a high-performance (and likely high priced) alternative to the company’s own low-power Atom processors. 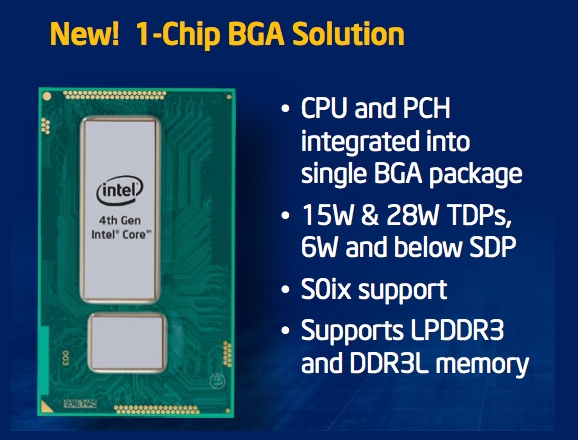 Intel says the new chip has an SDP of 4.5 watts. It actually has a TDP (Thermal Design Power) of 11.5W, but Intel introduced the concept of Scenario Design Power, or SDP earlier this year. The number’s lower because it measures the amount of power a chip is likely to consumer under typical usage conditions.

In this case, since we’re looking at an Intel Core Y-series processor designed for thin tablets and other computers with fanless designs, the 4.5W figure seems realistic — although at times it could jump higher if you’re running apps that aren’t optimized for low power devices.

Up until now the lowest-power Intel Haswell chips had an SDP of around 6W.

The new chip should enable device makers to offer tablets that are thinner and/or models that offer better battery life.

What we still don’t know is how the chip will be implemented. Theoretically it could end up in tablets that offer iPad-rivaling battery life while offering the ability to run both mobile apps and desktop-style software.

And if Intel prices these chips the way it prices its Atom, Celeron, or Pentium processors then you might even be able to buy those tablets for iPad-like prices. But if the new Y-series chips are priced more like higher-performance Haswell processors, you might be lucky to find a tablet with one of these chips selling for less than the price of Microsoft’s $899 Surface Pro tablet.