Intel is rethinking its low-cost, low-power processors for entry-level laptops in a big way this year. That mean a new name, new features, support for higher frequencies and more processor cores, and a new architecture… well kind of new.

The new Intel Alder Lake-N line of chips are basically what you’d get if you took Intel’s 12th-gen processors and only used Efficiency cores without any Performance cores. And that’s not a bad thing at all, because while the new chips won’t offer the same level of performance you’d expect from an Alder Lake-U, P, or H-series chip, they’re a big step up from the Jasper Lake processors that had previously been Intel’s go-to chips for laptops with starting prices below $400. 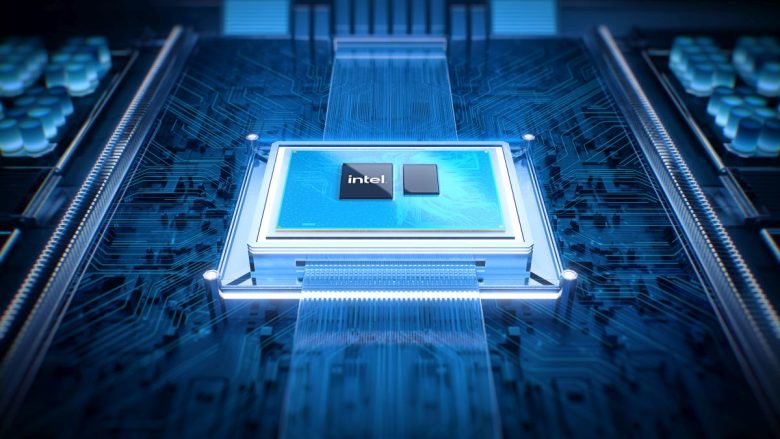 Alder Lake-N processors will be branded as Intel Processor Nxx or Intel Core i3-Nxx chips, depending on the model.

For example, the Intel Processor N200 is a 4-core, 4-thread chip with support for burst speeds up to 3.7 GHz. With PL1 and PL2 set at 6 watts and 25 watts, respectively, the chip should be pretty energy efficient.

The Intel Core i3-N305, meanwhile, is a 15-35W chip with 8 cores, 8-threads, and support for burst speeds up to 3.8 GHz. Basically it earns the Core i3 name by offering the kind of performance you’d expect from an entry-level Core chip rather than what Intel used to brand as Celeron or Pentium Silver. There’s no hyperthreading, but with 8 cores you might not miss it.

Alder Lake-N processors are manufactured using an Intel 7 process and use the same “Gracemont” architecture as the Efficiency cores in Alder Lake-U and faster chips. They feature Intel UHD integrated graphics with up to 32 execution units, and support for: 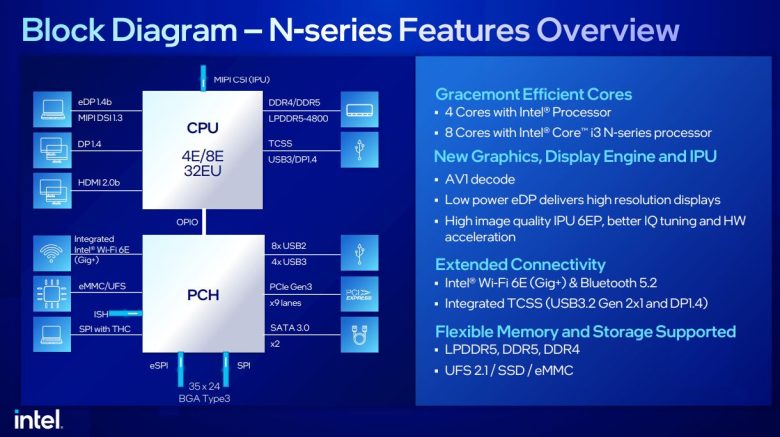 Intel says it’s dropping the Celeron and Pentium branding because they were confusing for shoppers. That’s something I probably could have told the company a decade ago… repurposing older brands and giving them new meanings was bad enough. The fact that Intel offered both Pentium Silver (Intel Atom-based) and Pentium Gold (Intel Core-based) chips just made things even more confusing. So I’m not sad to see those names go… but I do wonder about the decision to include a Core i3 model. Hopefully using 3 digits after the Core i3 instead of 4 will help set it apart.

In terms of performance, Intel says you can expect an N200 processor to offer up to 28% better CPU performance than a previous-gen Pentium N6000 chip, and up to 56% better graphics. Things look even better if you jump up to a Core i3-N305 chip, which should bring a 42% uplift in CPU performance and 64% faster graphics. 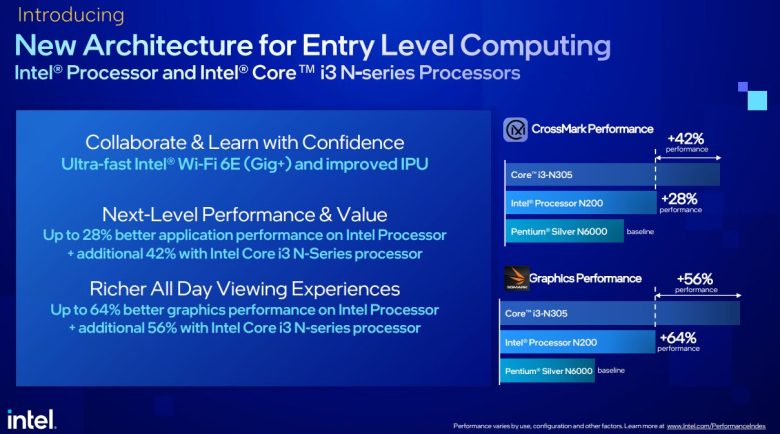 Other features include support for WiFi 6E, Bluetooth 5.2, AV1 video decoding, 10-bit HEVC/VP9 video encoding and decoding, and support for up to three 4K HDR displays thanks to HDMI 2.0b support.

Here are some key specs for some of Intel’s new low-power chips: