Intel’s been promoting Windows tablets, laptops, and hybrid devices for education through its Classmate PC program for a few years. But now the company’s taking a step into Android territory with two new “Education Tablets.” 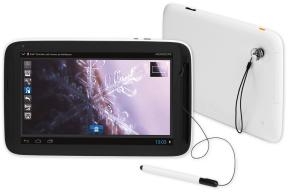 While the processor isn’t super-speedy and the display isn’t exactly a match for the full HD, IPS screen on the new Google Nexus 7, the entry-level specs should help keep this tablet affordable. That’s important if you want to buy a tablet for every student in your classroom or school.

The tablet has a capacitive touchscreen display, runs Android 4.1 Jelly Bean software, features 1GB of RAM, and has a 2MP rear camera and 0.3MP front camera. It has 8GB of built-in storage and a microSD card slot.

Intel says the 7 inch tablet should offer up to 8 hours of battery life, comes with Intel’s educational software, and is available with an optional capacitive stylus.

For some reason this model ships with Android 4.0 Ice Cream Sandwich instead of a newer build of Google’s operating system. The rest of the specs are largely the same as those for the 7 inch model, but the bigger display and faster processor take their toll on battery life.

Intel says this  the larger tablet is good for up to 6.5 hours of run time.

Interestingly, this model also lacks a microSD card slot, but it does have more built-in storage than its smaller sibling, at 16GB.

Both tablets feature 802.11b/g/n WiFi and optional Bluetooth. And both have access to Kno’s textbook software as well as other apps for students including software for taking notes, reading eBooks, and more.