Intel has been getting serious about beefing up the graphics capabilities of its processors over the past few years. The company’s 3rd-generation Core family of processors included Intel HD 4000 graphics that were good enough to play many recent video games without a separate, dedicated graphics card. And things are looking even brighter for the upcoming 4th-gen Core processors, due to start shipping in the second half of 2013.

The most powerful 4th-gen chips, code-named Haswell, will offer as much as 3 times the graphics performance of a 3rd-gen “Ivy Bridge” chip. But you’ll only see those sorts of performance gains in high-power desktop chips.

Notebooks and ultrabooks will also get a boost, but it won’t be quite as significant. 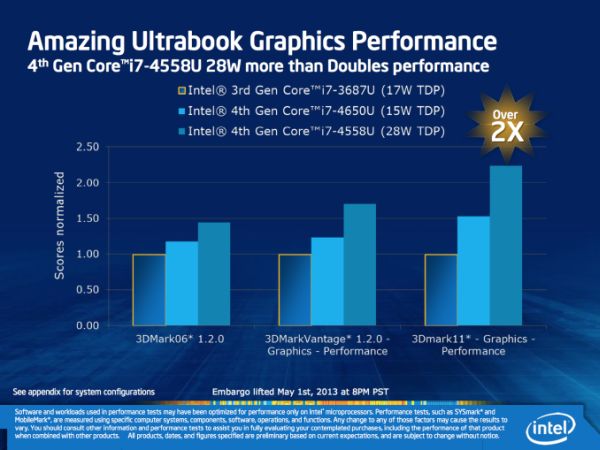 According to benchmark results released by Intel, the company’s 4th-gen Core i7 chips score twice as high on the 3DMark11 graphics benchmark as a Core i7 Ivy Bridge chip.

But that’s only true if you pit a 28W Haswell chip against a 17W Ivy Bridge chip. Intel will also offer a lower-power 15 watt Core i7 chip for thinner and lighter computers (and models that may get better battery life). It still outperforms the best of Ivy Bridge 17W chips, but performance has only increased by 50-percent, rather than 100-percent.

Still, any way you look at it, Intel’s next-gen integrated chips are going to offer the kind of graphics performance that you could only get from discrete graphics cards in years past.

Of course, AMD, NVIDIA, and other graphics card makers aren’t sitting on their hands. While it’s too early to say exactly how Intel’s upcoming integrated graphics chips will compare with the latest technology from those companies, we’re getting to the point where you may only need to buy a separate graphics card for your computer if you want to play bleeding edge games.