Most of Intel’s NUC computers to date have basically taken the guts of a laptop and stuffed them into a small box that’s easy to hide away behind a monitor or under a desk. If you’re looking for something that takes up less space than a typical desktop PC tower and don’t mind sacrificing some performance, they’re pretty good options.

But a few years ago Intel also made the case that you could use an NUC computer for gaming or as a video/graphics workstation PC by adding higher-performance GPUs to the Skull Canyon and Hades Canyon NUC systems.

Now Intel is getting ready to launch a new “Ghost Canyon” NUC that kicks things up a notch by letting you bring your own desktop graphics card. It’ll also be one of the first PCs to be available with up to a 10th-gen Intel Core “Comet Lake-H” processor. 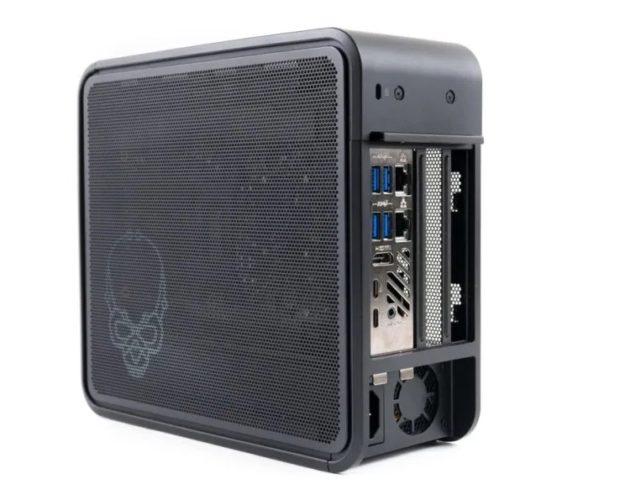 Details about the upcoming Ghost Canyon system have been leaking for months, and in October a member of the Chinese KoolShare forum posted an in-depth teardown and overview of a pre-production model. But at the time it looked like it would ship with a 9th-gen Intel Core H processor.

Now Intel has officially confirmed that the Ghost Canyon NUC is on the way, and that it’ll be powered by a removable NUC Compute Element with the company’s latest 45 watt processor options.

Intel hasn’t confirmed the price or release date for its Ghost Canyon NUC yet, but the company has confirmed a few things. It’s expected to be offer “desktop performance and gaming” in a 5-liter chassis. And it will hit a few firsts for the NUC lineup:

A graphic released by the company also indicates that there will be at least three processor/Compute Element options: Core i5, Core i7, and Core i9.

The system has a PCIe x16 slot for a discrete graphics card, which means you’ll be able to use NVIDIA or AMD graphics with the computer… or an Intel Xe graphics card when the company gets around to shipping those.

Between the support for discrete graphics and the use of an NUC Compute Element (which houses the processor, memory, and storage), the Ghost Canyon NUC will be the most modular Intel NUC to date. You’ll be able to upgrade or replace most of the hardware without buying a new chassis — but since most of the computer is actually housed in the Compute Module itself, I suspect upgrades won’t come cheap. It might be easier in some situations to just buy a new computer.