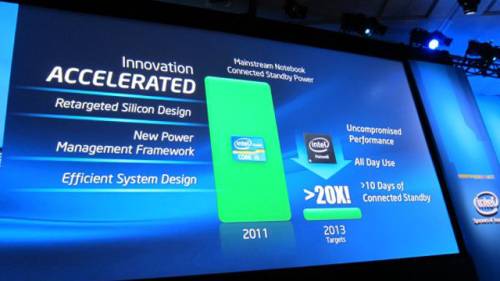 Once upon a time all it took to dominate the computer chip market was a good higher performance chip. But over the past few years the game has changed and chip makers are focusing on improving performance while reducing energy consumption. Intel has been cranking out low power Atom chips for netbooks and tablets for the past few years, but ARM-based processors have been dominating the low power smartphone and tablet space.

In 2013 Intel plans to take a serious step forward with its new Haswell platform. Today the company started showing off early versions of the chip, which it says will use 20 times less power while idle than today’s chips.

That could lead to mobile devices that can run for 24 hours on a charge, or for up to 10 days in connected standby mode. Connected standby is a new Windows 8 feature that works much like the “always on” features in most smartphone operating systems, letting most of your computer’s processes sleep while the screen is off, but still connecting to the internet so you don’t miss important instant messages, emails, or other notifications.