Intel plans to refresh its low-power, low-cost mobile processor lineup in time for the 2014 back-to-school season this fall. We’ve already seen that a series of new Intel Atom Bay Trail chips for tablets are on the way. Now Intel is unveiling next-gen Bay Trail and Celeron chips for notebooks, tablets, 2-in-1 systems, and desktops.

The company is adding a few new features, offering chips with improved performance, and promising cost reductions for system builders.

Intel says most of the new chips will offer higher CPU and GPU clock speeds than their predecessors, while the new Celeron N2000 chips will feature a boost in memory bandwidth of more than 20 percent.

The company is also adding support for eMMC, I2C, and SDIO for WiFi in order to reduce costs for system builders, since that’s one less separate part to pay for.

Intel’s next-gen low-power desktop chips include the Celeron J1800 and J1900 and Pentium J2900, with improved graphics performance, support for burst speeds and other features like Quick Sync that are also available on the new mobile chips. 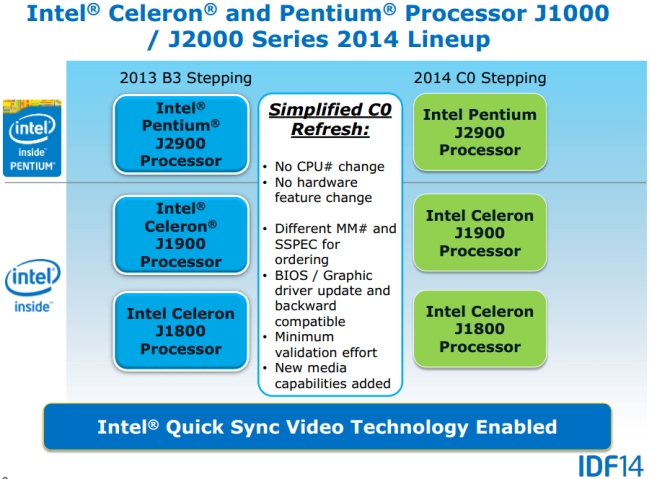 The chip maker plans to talk more about the new chips at a Intel Developers Forum session in China, where the company will, among other things, introduce a proof of concept design for a fanless 11.6 inch Android tablet or 2-in-1 convertible featuring a 4.5W processor, a 2560 x 1440 pixel display, 64GB of storage, WiFi, Bluetooth, GPS, an 8MP rear camera and 2MP front-facing camera, and a 40Whr battery.