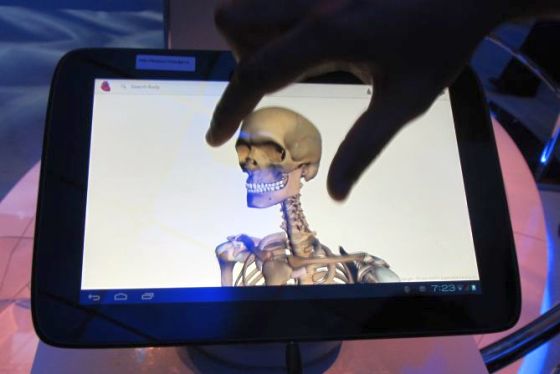 Intel is showing off a tablet prototype with a 1.5 GHz Intel Atom Medfield processor and Android 4.0 operating system.. The tablet is a pre-production unit from Lenovo called the IdeaTab S2110 and to be honest, it looks nearly identical to any of the dozens of 10 inch Android tablets we’ve seen over the past year.

That’s not necessarily a bad thing. It shows that Intel’s latest chipset can compete with low power ARM chips, offering similar overall performance and similar battery life. Intel says the S2110 should be able to run for up to 10 hours on a charge and get much, much more time in standby mode.

One key challenge Intel (and MIPS, and any company that designs chips that aren’t based on ARM architecture) faces is app compatibility. Most apps written for Android will run on tablets with x86 processors if they’re designed to run in the Dalvik Java virtual machine. But if they’re native apps, developers will need to port them to run on Medfield or other x86 chips. Intel says it will make tools available to developers to ease that process.

Note that the second tablet at the end of the video is actually just a Samsung Series 7 Windows Slate running Windows 8. It has an Intel Core i5 processor and it’s basically the same device I reviewed last month.