We got an early look at the upcoming “Crimson Canyon” NUC in April. Now retailer SimplyNUC is taking pre-orders for two different configurations and giving us a better idea of what to expect from the little PC.

The NUC813CYSM is expected to ship in mid-September and a model with 8GB of RAM, 1TB of storage, and Windows 10 Home is up for pre-order for $575.

There’s also an NUC8i3CYSN system with 4GB of RAM, 1TB of storage, and Windows 10 Home priced at $530. That model is expected to ship in October. 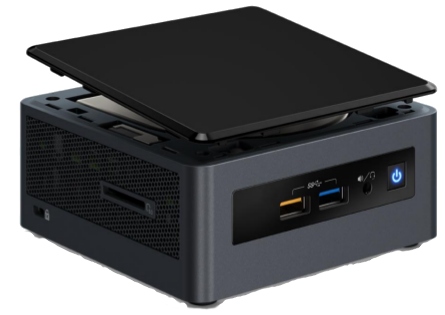 Those are basically laptop-class components: the processor is a 15 watt, dual-core chip with support for hyperthreading and a base clock speed of 2.2 GHz and boost speeds up to 3.2 GHz. The most interesting thing about the processor is that it’s one of Intel’s first 10nm chips, but you’d probably still get better performance from an Intel Core i5-8250U quad-core chip, even though it’s a 14nm processor.

AMD’s Radeon 540 GPU, meanwhile, has 8 computer units, 512 stream processors, and 2GB of GDDR5 memory, which should offer a significant boost over the integrated graphics you get with most Intel NUC computers (although it won’t match the Radeon Vega M graphics you get from an Intel “Hades Canyon” NUC).

Despite the relatively low-power processor, the company says the computers are appropriate for video and graphics editing and rendering, as well as business applications thanks in part to the included Radeon graphics.

Here’s a run down of specs/features for the Crimson Canyon NUC systems:

There are a few unusual things about the Crimson Canyon NUC models. The first is that the RAM is soldered to the motherboard and there’s no option to upgrade. So if you want more than 4GB of memory you’re going to want to pay extra for the 8GB version up front.

Second, Intel isn’t currently offering barebones configurations. So while you can certainly add an SSD or replace the hard drive, every model that Intel is promising to ship so far comes with a 1TB hard drive pre-loaded with Windows 10. That’s why SimplyNUC doesn’t offer a discount if you opt for a version with no operating system installed.

SimplyNUC says the Crimson Canyon NUC computers should be able to handle up to two 4K displays with refresh rates up to 60 Hz and there’s support for 7.1 channel surround sound via HDMI output.