Intel’s first 10nm chips are on the way, and while they’ll still be positioned as part of Intel’s 8th-gen Core processor family, they’ll be based on the company’s new “Cannon Lake” architecture.

We already had a good idea that some of the first Cannon Lake chips would be 15 watt U-series processors aimed at laptops, mini desktops, and other low-power PCs.

Rumors have been making the rounds for a while that one of the first computers to feature an Intel Cannon Lake-U chip would be a new NUC mini PC code-named “Crimson Canyon.” But according to a report from WinFuture, the processor may not be the only unusual thing about Crimson Canyon: it could also be the first NUC to feature discrete graphics. 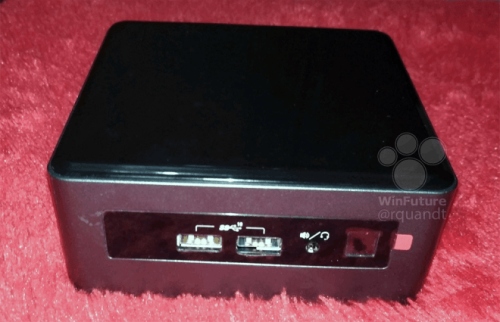 WinFuture found a few images that allegedly show the unannounced Crimson Canyon NUC and it looks… a lot like existing NUC devices. The key changes are under the hood, where the new model is expected to sport an Intel Core i3-8121U dual-core Cannon Lake-U processor and AMD Radeon 500 series graphics with GB of GDDR5 memory.

Intel already offers another NUC with AMD graphics: the company launched the Hades Canyon NUC recently, featuring an Intel Kaby Lake-G processor with an AMD GPU. But in that case the AMD GPU and Intel CPU are on the same package.

It looks like Crimson Canyon could be the first NUC with a GPU on a separate chip, which is pretty impressive for a device that seems to be about the same size and shape as Intel’s mini computers with integrated graphics only.

Intel is expected to offer at lest two Crimson Canyon configurations, including a NUC8I3CYSM2 model and an NUC8I3CYSM3 version. Both are already listed at some online retail sites, although most of those sites don’t show any pictures or detailed specs.

At this point it’s unclear if all Crimson Canyon devices will have AMD graphics. It may just be an optional feature for some models. But it does seem like all Crimson Canyon models will be powered by 10nm Cannon Lake-U processors.