Intel’s Compute Stick is basically a fully functional, low-power PC crammed into a device that looks like an oversized USB flash drive. Plug it into the HDMI port on a TV, connect a power source, and you can run Windows, Linux, or other operating systems on a TV, monitor, or commercial display. 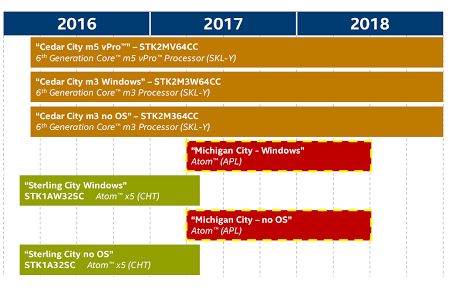 According to the roadmap, Intel will release the new chips sometime around the second quarter of 2017, and they’ll feature Intel Atom chips based on the Apollo Lake platform, which is a follow-up to the Cherry Trail and Braswell platforms that were used for low-power Atom, Celeron, and Pentium chips released in 2015 and 2016.

There will be at least two models:

Intel has largely phased out the Atom brand for its laptop, tablet, and smartphone chips, instead branding Apollo Lake chips for those platforms as Celeron or Pentium. But the company has released a few new Atom chips aimed at Internet of Things applications, including the Atom E3900 and Atom T5500 and T5700.

It’s not clear if Intel plans to use one of those chips for its next Compute Stick, or if the company has a different processor on the way. But what we know about those chips suggests that the new Atom T series chips could be up to 50 percent faster than Cherry Trail chips, support 4K video decoding and encoding, and support higher memory bandwidth, among other things. .

Update: Upon closer inspection, it’s not clear that Intel Atom T chips will use significantly more power than their Cherry Trail counterparts. But it’s also not clear if Intel’s next-gen Compute Stick will use a T series chip, E series, or something else.

The E series chips include features for in-car computer, video surveillance systems, and other IoT products. If Intel is still positioning its Compute Stick devices as products for both consumer and enterprise customers, then the E series doesn’t seem like a great fit, but the chips could make sense if Intel envisions companies buying the sticks for commercial applications.