Intel’s Compute Stick is a tiny computer-on-a-stick that’s small enough to hold in one hand or slide into your pocket. Plug the HDMI connector on one end into a display and you can turn just about any screen into a PC.

The first Compute Stick began shipping recently and it features an Intel Atom Z3735F Bay Trail processor, 2GB of RAM, 32GB of storage, and Windows 8.1 software. It sells for about $150, and Intel will release a cheaper, Linux-powered model with 1GB of RAM and 8GB of storage soon.

But what’s next for the Compute Stick? According to a leaked roadmap we’ve received, quite a bit! 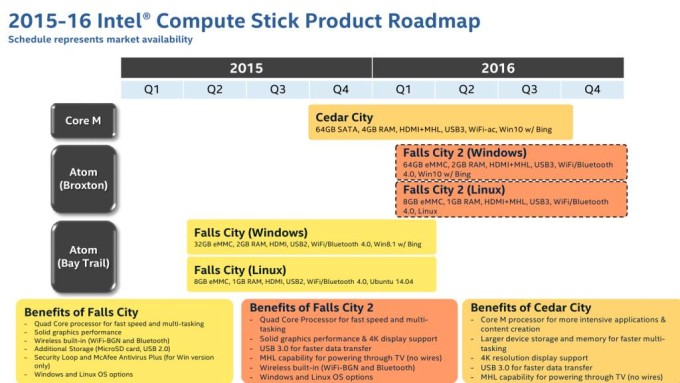 Later this year Intel will launch the first Compute Stick with an Intel Core M processor. We knew it was coming, but what we didn’t know until now is that the next-gen Compute Stick, code-named “Cedar City” will have some other big improvements as well. It features:

The MHL feature means the Cedar City model will be able to draw power from the HDMI port on TVs that support MHL. You won’t have to use a micro USB cable to power the stick.

Intel only plans to offer a Windows version of the Cedar City Compute Stick, but I suspect you’ll be able to install Ubuntu or other GNU/Linux operating systems on your own.

In early 2016, Intel will launch “Fall City 2” models, which replace the current Compute Stick models (which are, not surprisingly, code-named Falls City).

These sticks will feature Intel Atom chips based on the upcoming “Broxton” architecture. In other words, don’t hold your breath waiting for an Intel Compute Stick with a Cherry Trail chip. It’s not coming. Instead Intel is skipping Cherry Trail and designing its next-gen Compute Sticks on the CPUs that will launch after Cherry Trail.

That doesn’t mean we won’t see Cherry Trail-powered PC Sticks. There’s nothing stopping other computer makers from building them. But they don’t seem to be part of Intel’s roadmap.

Falls City 2 should offer better performance than today’s Compute Sticks thanks to their next-gen processors. They’ll also feature USB 3.0 ports for faster data transfers, MHL support for connecting to a display without a separate power cable, and these models will support 4K displays thanks to improved graphics.