When the original Intel Compute Stick shipped earlier this year, it came with Windows 8.1 pre-installed, but like most recent Windows computers it’s eligible for a free upgrade to Windows 10.

Don’t want to go through the hassle of upgrading? Now Intel is selling the Compute Stick with Windows 10 Home.

B&H sells the tiny computer for $140, while Newegg Business is selling the same model for $150. 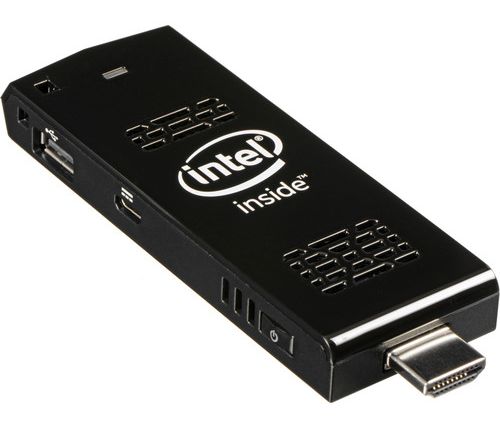 The only difference between this new Compute Stick and the original is the operating system. It still has 2GB of RAM, 32GB of eMMC storage, and an Intel Atom Z3735F Bay Trail quad-core processor.

It’s also still a pocket-sized PC with an HDMI connector on one end, allowing you to plug the computer into a TV or monitor to run Windows apps on a big screen.

Soon Intel is expected to offer new versions with more powerful processors, and some other companies have already introduced similarly-sized PC sticks with Intel Cherry Trail chips. But the best alternative to the Windows 10 Intel Compute Stick may still be the Windows 8.1 version: you can pick one up for as little as $115 and upgrade it yourself… or install a different operating system such as Chromium or Ubuntu.

If you can get by with just 1GB of RAM and 8GB of storage, you can also purchase an Intel Compute Stick with Ubuntu 14.04 Linux for $85.

One reply on “Intel Compute Stick now available with Windows 10”