Intel’s most powerful PC-on-a-stick is now available for purchase (or pre-order) in the United States. The new Intel Compute Stick features an Core M3-6Y30 processor, 4GB of RAM, and 64GB of storage.

CDW is taking orders for a model with no operating system for $317, and Amazon has a Windows 10 version for $385. B&H is also selling the Windows model for $389. 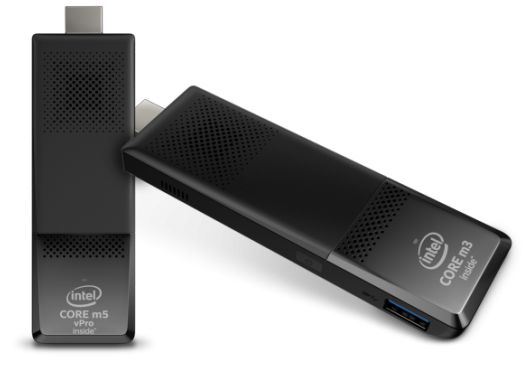 That makes this the most expensive Compute Stick to date, but it also has twice the RAM and twice the storage of any earlier model… and a processor that offers much better performance than the Atom chips available in cheaper PC sticks.

I haven’t had a chance to test the Core M model myself, but Ian Morrison has posted a review featuring benchmark comparisons with Intel’s Atom-based Compute stick models.

In a nutshell, the Core M Compute Stick offers about 2-3 times the CPU and graphics performance of a model with an Atom x5-Z8300 Cherry Trail processor in most tests. The improvements over the older Atom Z3735F-powered model are even greater.

Morrison tested a model that came with Windows 10 pre-installed, but he notes that Ubuntu 14.04.3 and Ubuntu 16.04 Beta 2 seem to run well on the tiny computer, as does Chromium OS.

The new Core M model also has three full-sized USB ports: 1 is on the PC stick itself, and 2 are located on the power adapter.

All told, this may be the first Compute Stick that you could justifiably use as a general-purpose desktop computer… although it still won’t be as powerful as a desktop with a Core i3 or faster chip. And an Intel NUC computer with a Core i3 Skylake chip is actually cheaper than a Core M Compute Stick.