The upcoming Intel Compute Card is basically a computer stuffed into a case that’s not much larger than a credit card. Intel unveiled the platform at the Consumer Electronics Show this month, and says when the first Compute Cards launch later this year, they’ll be able to power all sort of smart devices.

Want to make a smart refrigerator or smart TV? Instead of building in a processor, memory, storage, and other PC components, you can design around a Compute Card. That was you can use the latest hardware Intel has to offer… and you can allow customers to upgrade to newer hardware in the future by purchasing a new Compute Card.

When I spoke with an Intel representative about the platform, I was told the Compute Card could work in a wide range of devices, but that the company was focusing on all-in-one desktops, smart home appliances, and other Internet-of-Things products at launch… and not on laptops or desktops.

But it turns out one of Intel’s first partners is playing to make an upgradeable laptop that’s powered by a Compute Card. 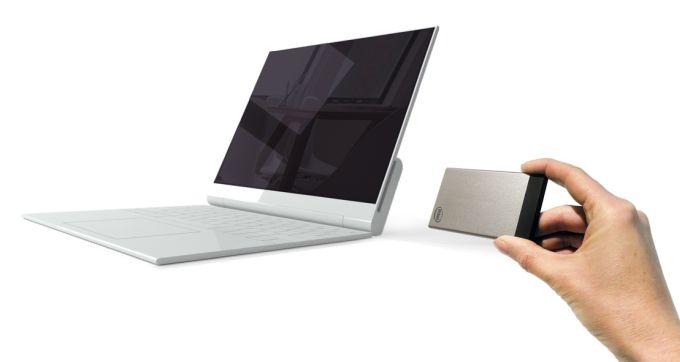 NexDock ran a crowdfunding campaign last year for a device that lets you use a smartphone like a notebook computer. The NexDock looks like a laptop, but it’s basically just a big screen, keyboard and battery designed to connect to a phone so that you can run your mobile apps on a larger device.

After shipping that first-generation device in 2016, NexDock has announced something new for 2017: a new 2-in-1 PC that features a tablet and a detachable keyboard… and which uses an Intel Compute Card for its brains.

The new NexDock will have a USB Type-C port, an HD (or higher resolution) display, and a built-in kickstand. Like the original NexDock, it doesn’t have a processor, memory, storage, or operating system. Instead, all of those things are on the Intel Compute Card, allowing you to choose the module that best meets your needs (Intel plans to offer a range of Compute Modules, although it’s likely that most will use low-power processors with 6 watt or lower TDPs).

NexDock’s upcoming device isn’t exclusively designed for the Intel Compute Card. You’ll also be able to connect it to a smartphone, Raspberry Pi, or other mini computer much the same way you can with a first-generation NexDock.

Eventually NexDock hopes to launch other devices such as all-in-one desktops that can also be powered by an Intel Compute Card, smartphone, or other devices.