The Intel Compute Card is a tiny computer about the size of a few credit cards stacked on top of one another. First unveiled in January, the first Compute Cards and accessories should be available soon.

While they have some pretty clear applications for commercial products, it’s a bit less clear whether there’s currently any reason for a home user to buy a Compute Card.

But Intel sent a demo unit plus a docking station to Ian Morrison, who wanted to find it, and he’s posted some initial impressions, benchmark results, and a few details about running Windows and Linux on the system.

The Compute Card basically has the guts of a low-power desktop computer, but unlike some other tiny computers (I’m looking at you, Intel Compute Stick), the Compute Card isn’t quite a standalone device. You need to plug it into a docking station to hook up a mouse, keyboard, display, or other peripherals.

Right now, that means you can plug it into a desktop dock to create a small form-factor desktop PC with USB and DisplayPort connectors, among other things.

Eventually those docking stations could include TVs or monitors (create your own all-in-one PC by inserting a Compute Card), or laptop shells (like the upcoming NexDock).

The model Morrison tested features an Intel Core m3-7Y30 processor, which is a 4.5 watt, dual-core chip with Intel HD graphics. Other features include 4GB of RAM and 128GB of PCIe NVMe solid state storage.

The CPU is an upgrade over the Core m3-6Y30 used in the previous-gen Compute Stick, and the SSD is a huge upgrade over the eMMC storage used in Compute Sticks. So it should come as no surprise that the new Compute Card performs better in benchmarks such as Passmark, PCMark, and 3DMark. It also runs circles around the earlier machines in tests that focus heavily on data read/write speeds such as CrystalDiskMark and IOzone (from the Phoronix Test Suite).

Overall, it sounds like the Compute Card is a big upgrade from earlier Compute Sticks when it comes to performance. But it may hold less appeal as a consumer product… for now.

The card itself is wider, but generally just as compact as a Compute Stick. But unlike the Stick, the Compute Card is useless without a dock of some sort. Intel’s official desktop dock turns it into a useful computer, but one that’s closer in size to an Intel NUC… and which reportedly has a fan that’s audible all the time. 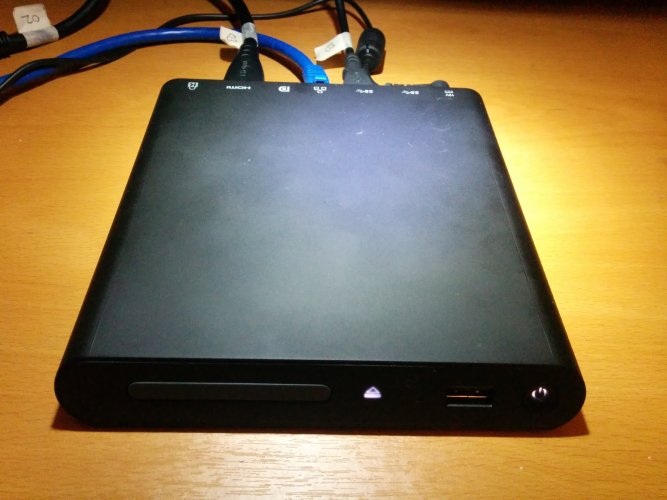 If you’re in the market for that sort of device, you’d probably be better off just buying an NUC or similar desktop PC. It’ll probably be cheaper and more versatile.

But if the Compute Card form factor takes off, the platform could get a lot more exciting. Imagine being able to use it with a desktop dock at home, then eject the card and put it into a laptop or tablet dock to use while you’re traveling. When you get to work, pop it out of the laptop dock and stick the card into a desk dock at your workspace. It’s a single card that can power multiple experiences without requiring you to make multiple copies of your data, install multiple instances of the same apps, or rely on the cloud for apps, storage, or sync.

And in the future you may be able to buy a new Compute Card with more powerful hardware and use it with your existing desk and travel docking stations.

That’s one vision of a Compute Card future anyway. Another is smart TVs, digital signage, and other systems that need the smarts of a computer without the bulk of a computer. The Compute Card could give developers of those platforms an easy way to add a full-fledged, Windows or Linux-capable computer to their hardware.

I’d like to think that means you’ll be able to by a smart TV with a Compute Card in a year or two… and upgrade the brains by swapping out Compute Cards a few years down the road. But I suspect the upgradability may not be as important to TV makers as the compact package of the Compute Card, so swapping out cards on your own may not be an option.

Anyway, it’s still early days. But thanks to Morrison, we’re starting to at least get an idea of what the entry-level Compute Card is capable of when used as a desktop PC. You can find more details at his website.