Word on the street is that Intel’s upcoming 10nm Cannonlake processors might not ship until 2018. But it looks like someone at Intel is testing some pre-production units, because two different Cannonlake chips have shwoed up at benchmark sites recently. 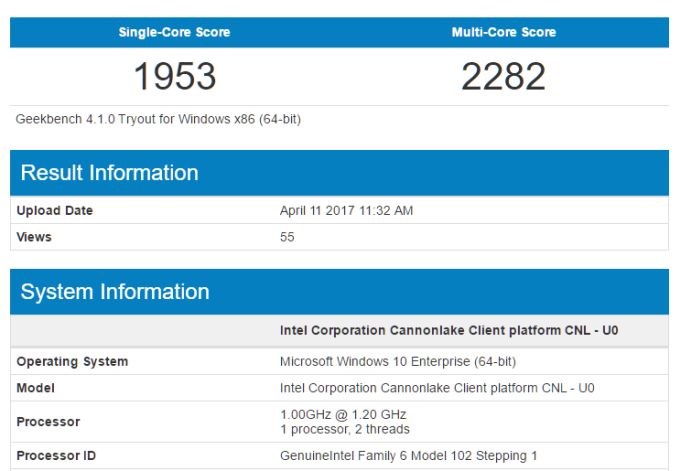 You probably shouldn’t read to much into the specs shown for either chip, since there’s plenty of time for things to change before the first Cannonlake processors hit the streets. But it’s always nice to see confirmation that the next-gen architecture is ready for testing.

The Geekbench listing is for a 1 GHz single-core 64-bit processor with support for hyperthreading ( so you have 1 core, but 2 threads). It also supports burst speeds up to 1.2 GHz, features 256KB of L2 cache, 4MB of L3 cache, and support for at least 8GB of DDR4 memory.

The chip in the Sandra database is a 3.3 GHz dual-core processor with support for hyperthreading, 256KB of L2 cache and 4MB of L3 cache.

via @rquandt, AnandTech forum, and /r/apple

One reply on “Intel Cannonlake chips show up in Geekbench, Sandra benchmark results”