The Intel “Beast Canyon” NUC is a gaming PC with an 8 liter chassis and a modular design. You can easily add just about any high-end graphics card (assuming you can get your hands on one these days). But the brains of the computer, including the processor, memory, and storage are all on a removable Intel Compute Element that fits into a PCIe slot in the chassis.

Intel has been selling compact computers under the NUC (Next Unit of Computing) brand since 2013, but the new Beast Canyon model (also called NUC 11 Extreme) is the most powerful to date. It’s also the largest. And it might be the one most geared toward mainstream gamers: I don’t recall ever seeing so many websites publish reviews of a new NUC on the same day. Here are some of the things I learned from those reviews. 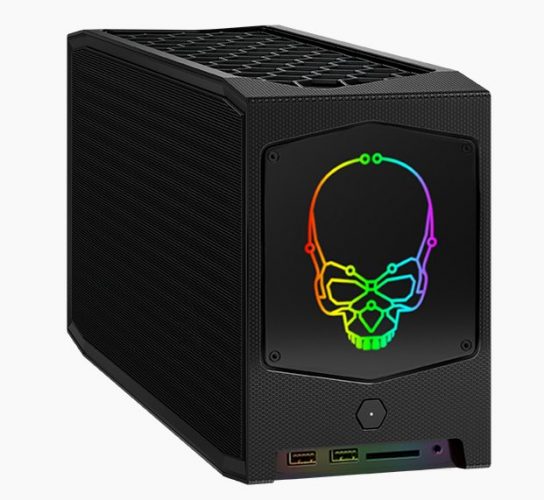 The key thing that sets Intel’s Beast Canyon NUC apart from other gaming computers (and other Intel NUC) models, except for last year’s 5 liter “Ghost Canyon,” is that the heart of the computer is the removable Intel Compute Element.

Intel offers two 11th-gen NUC 11 Extreme Compute Elements that are compatible with Beast Canyon: a Core i7-11700B model and a Core i9-11900KB version. Each is basically its own computer that fits into a PCIe slot.

You can take out the Compute Element, open it up, and add up to three M.2 2280 cards or up to 64GB of DDR4 memory, close the module up, and put it back in the computer.

But the chassis itself has a backplane that also supports up to a 350 watt, dual-slot graphics card (like the NVIDIA GeForce RTX 3080 Ti Founder’s Edition), as well as other peripherals including PCIe storage or other cards. There’s also a fourth M.2 slot in the Beast Canyon system that you can use for Intel Optane memory or another SSD.

The modular nature has a few advantages. First, the Compute Element takes up less space than a traditional motherboard. Second, you could buy a Core i7 system and then upgrade to Core i9 down the road if you want more power.

Theoretically you could also buy a system featuring a 11th-gen Intel Tiger Lake processor and then upgrade to next-gen hardware after it’s released. But there’s no guarantee that everything will work in a few years if you invest in Intel’s current-gen modular system.

Last year’s Ghost Canyon NUC, for example, also used Compute Elements. But it was designed for modules with 9th-gen Intel Core processors. Already have a Ghost Canyon system and want to use an 11th-gen Compute Element with it? Intel says it’ll fit, but the company won’t provide support and some things may be an awkward fit: for example, there’s no front panel audio on the new cards.

So buying a Beast Canyon NUC in hopes that you’ll be able to swap out the 11th-gen Intel processor for a 12th or 13th-gen chip in a few years may be a bit of a gamble.

And with that in mind, it’s worth noting that the $1150 starting price for a Beast Canyon NUC with a Core i7 processor is fairly steep, especially considering that you’ll still need to buy a graphics card to get the most of the computer.

You could probably build your own gaming rig for less money. But it probably won’t be as small.

While this year’s model is substantially larger than the Ghost Canyon NUC, it’s still pretty small by gaming desktop standards… while offering enough room for full-sized graphics cards as long as 12 inches, (you needed to find an 8 inch or smaller card for Ghost Canyon).

That allows Intel’s latest gaming computer to come within striking distance of full-sized gaming desktops when it comes to gaming performance and benchmarks. It helps that in addition to having a 650 watt power supply, the system has plenty of cooling (there are three cooling fans built into the side) power to keep the computer from overheating.

One other new feature in this year’s model? Customizable RGB lighting effects let you adjust the look of the bottom of the chassis and the skull logo on the front (you can also just shut off the lights if you don’t want to look at a glowing skull, and Intel provides instructions for making your own custom front panel to replace the skull with other imagery).

Here are some of the first Intel Beast Canyon NUC reviews from around the web: