Both of these computers are being positioned as part of the Bean Canyon family that first launched in 2018, but these are “Bean Canyon Lite” systems since they feature less impressive CPU and GPU performance. 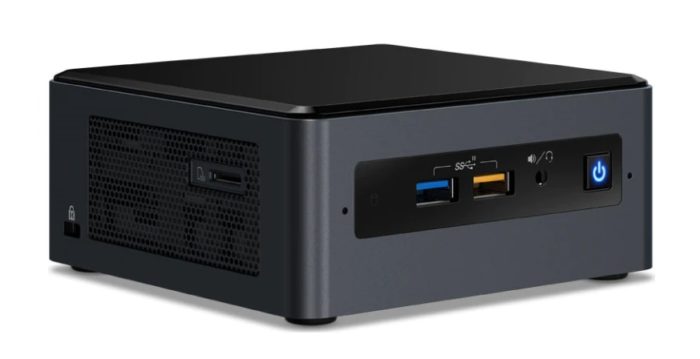 The processors in the new Bean Canyon Lite NUCs are 14nm, 15-watt processors that appear to be part of Intel’s 8th-gen Core product lineup. With model numbers ending in 0 rather than 5, these are probably Kaby Lake Refresh chips rather than Whiskey Lake.

Here’s what we know about the new chips so far:

Both processors support up to 64GB of DDR4-2400 memory, feature Intel UHD 620 graphics, and support for up to three external displays through a combination of HDMI 2.0a and DisplayPort 1.2/USB-C ports.

In other words, the new Bean Canyon Lite NUCs fill a small  niche in Intel’s line of current-gen NUC products. The recently launched Provo Canyon lineup with Whiskey lake chips should offer slightly better performance, while the new Frost Canyon NUC with up to a hexa-core Intel Core i7-10710U Comet Lake processor should be even better, while still featuring a small form-factor body.

But putting the new system in the same line as the former Bean Canyon NUC is an interesting choice — the original Bean Canyon systems are still some of the most powerful Intel NUC computers to date (not counting the gaming/workstation-specific models like Skull Canyon, Hades Canyon, and Ghost Canyon).