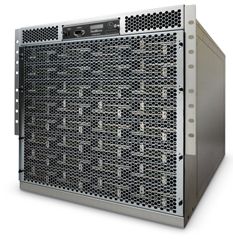 Low power Intel Atom chips have changed the way we think about battery life and “good enough” performance in low-cost laptops. But it turns out that these chips which were designed for low power laptops are also useful in other areas typically dominated by expensive, power-hungry chips. A company called SeaMicro is building servers that use just a quarter of the energy of a typical server, by using Intel Atom processors.

We’re not actually talking about “low power” here, so much as lower power. What SeaMicro is doing is putting a whole bunch of Atom processors together in order to achieve the kind of performance you would expect from a more powerful chipset.

How many Atom chips does that take? Around 512 of them. Even with a fairly tiny power draw per chip, that’s still a lot of energy — but it’s a lot less than you’d use with a more traditional server setup.

SeaMicro plans to start offering its Atom-based server products next month. You can find more details at Wired Magazine or the SeaMicro web site.