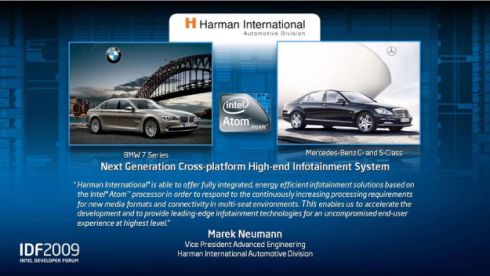 If you were wondering why Intel is pushing forward with the low power Intel Atom processor line while the company is busy pumping out higher power CULV chips that are still capable of providing extremely long battery life, that’s because Atom chips aren’t just for netbooks. The company is pushing the Atom platform as a low power solution for in-car entertainment systems, and announced this week that BMW and Mercedes will be two of the first auto companies to bring car to market with Atom-based entertainment centers.

The BMW 7 and Mercedes S and C class cars will hit the streets in 2012 sporting carputers (or in-vehicle-infotainment-systems) that feature 3D navigation, and internet access. I’m going to go out on a limb and predict you’ll also be able to listen to music from a hard drive, and/or the internet if that feature is enabled.

Intel says that while BMW and Mercedes are the first to announce plans to install computers using the low power Intel Atom z5xx series chipset, other car makers will be making similar announcements soon.