Intel’s next-generation Atom chips for tablets, code-named “Bay Trail-T” are due to hit the streets in 2014, according to leaked documents obtained by Mobile Geeks.

This isn’t the first time we’ve heard about upcoming Bay Trail processors, but while Intel is working on next-gen chips for tablets, notebooks, desktops and other applications, these documents look squarely at the tablet chips which will eventually replace today’s Clover Trail processors. 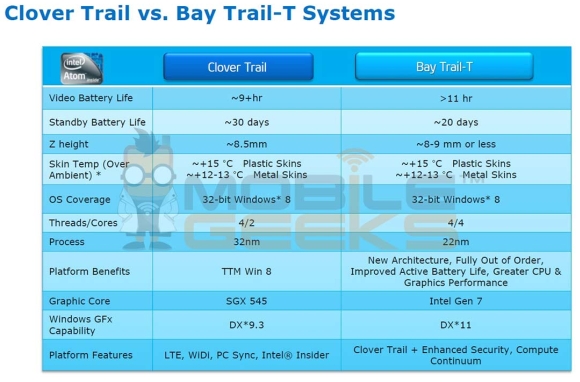 Here are some of the biggest changes:

According to the leaked documents, devices with Bay Trail-T chips should offer better performance than tablets with Clover Trail processors while consuming less power. That means, all other things being equal, a tablet would get around 11 hours of battery life instead of 9.

Make no mistake, Atom processors will continue to be low power chips aimed designed to offer acceptable performance and long battery life rather than bleeding-edge performance. If you want a super-speedy tablet in 2014, you’re probably going to want to look for a model with a Haswell or newer chip.

But it’s interesting to see where Intel is going as the company tries to battle the dominance of ARM-based chips in the tablet space.

Also interesting is the fact that the company will be under new leadership as it makes that transition. After 8 years as CEO and more than 40 years with the company, Paul Otellini will be retiring in May, 2013.