Intel has been making low power, low cost Atom processors since 2008. But to be honest, the fastest Atom processors today aren’t much speedier than the Atom N270 chip Intel first released for netbooks four years ago.

The company has moved from single core chips to dual core, and added support for HD video playback. Intel has also branched out into even lower power Atom chips for phones and tablets.

But the biggest change is yet to come. Ars Technica tracked down some leaked documents that show where Intel is taking its Atom line of chips in late 2013. 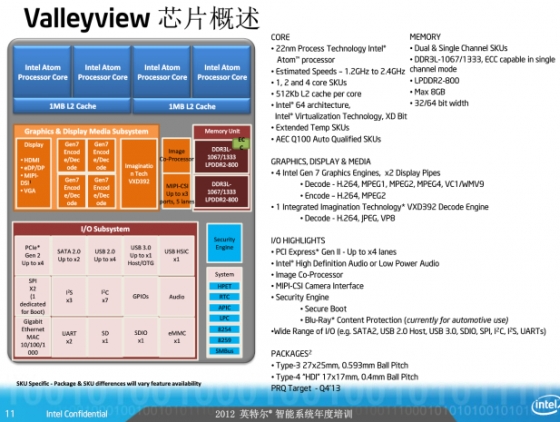 The new chips are code-named Bay Trail, and they’re based around a Valleyview processor core with a Silvermont CPU and Intel GPU that’s similar to the graphics processor found in today’s Ivy Bridge chips (although a little less powerful).

Bay Trail chips will come in a few different versions, with some models aimed at desktop and notebook/netbook computers, others aimed at tablets and possibly smartphones, some designed for servers, and others for embedded applications such as digital signage, industrial equipment, or in-vehicle systems.

Here are some of the highlights of the Bay Trail platform:

We won’t see these chips until later 2013 or early 2014. While they look like pretty significant upgrades to the Atom line, Intel’s competitors aren’t exactly sitting still.

I suspect we’ll see next-generation x86 chips from AMD and ARM-based processors from NVIDIA, Samsung, TI, Qualcomm, and others before Bay Trail chips hit the streets.

But it’s nice to see Intel is working to step up performance in its low power processor line.