Intel has been promising that it’s next-generation of low-power Atom processors for tablets would offer better performance while using less power than any Atom chips to date. Now Intel engineer Francois Piednoël is proving the point.

He’s posted benchmark results for an upcoming Intel Atom Bay Trail processor called the Atom Z3770. It’s a quad-core chip running at 1.47 GHz, and according to AnandTech it scores almost as well in the Cinebench test as a 2011-era Intel Pentium processor. 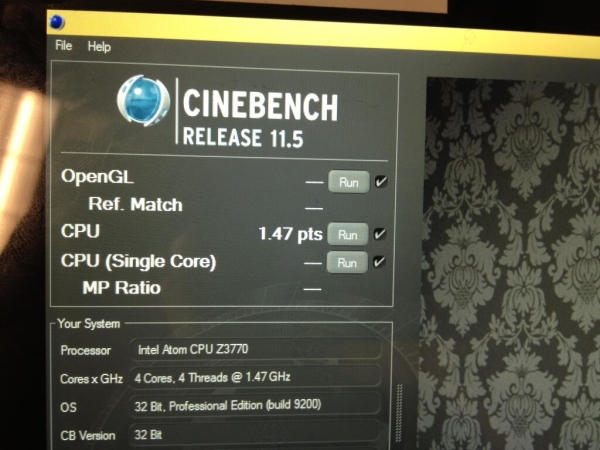 In other words, Intel’s upcoming low-power tablet chips will offer the same kind of performance you would have gotten from one of Intel’s best laptop chips just 3 years ago.

At least, that’s what we see when running a multi-core test like Cinebench.

Geekbench scores from July suggest that the Atom Z3370 will be significantly faster than today’s Clover Trail chips… but it won’t necessarily be 3 times as fast.

We’ll probably have to wait a little longer to see how the chip holds up under real-world conditions. Devices with Bay Trail processors are expected to ship in late 2013 or early 2014.