Intel is developing a new small form-factor desktop computer powered by 10-watt Intel Celeron or Pentium Silver “Jasper Lake” processor options. Code-named “Atlas Canyon,” the new system will be known as the NUC 11 Essential and while Intel hasn’t officially announced the new product yet, FanlessTech has the details from what looks like an official product info slide. 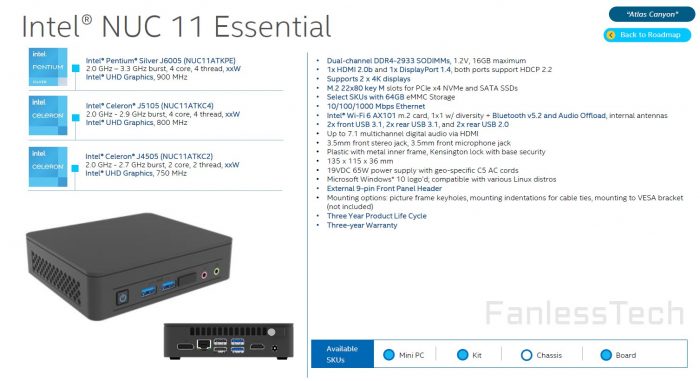 Speaking of fanless technology, the Intel NUC 11 Essentially will be actively cooled. But some third-party vendors have a history of offering aftermarket fanless cases for Intel NUC systems, allowing you to remove the fan for silent operation. That’s even easier to do on low-power models like this.

According to the spec sheet, the new system measures about 5.3″ x 4.5″ x 1.4″ and has room inside the case for up to 16GB of DDR4-2933 dual-channel memory and M.2 2280 keys for PCIe x4 NVMe or SATA SSDs. There’s no drive bay for a hard drive with this model, but Intel will offer some models with 64GB of eMMC storage built in.

The computer also features WiFi 6 and Bluetooth 5.2 and there’s a 9-pin front panel header that could be used to provide configurable port options.

At the heart of the computer will be one of three processor options:

These chips are 10nm processors that feature CPU cores based on Intel’s Tremont architecture, and they’re expected to bring up to a 35-percent performance boost over previous-gen “Gemini Lake Refresh” processors.

Unfortunately the Atlas Canyon NUC isn’t expected to ship until the beginning of 2022. The global chip shortage may be at least partially to blame for that.

In the meantime, you may be able to find mini PCs with Jasper Lake chips from other PC makers. One Chinese company called Newsday Technology has already introduced one.