Intel’s ARC A750 and A770 desktop graphics cards are designed to offer performance comparable to what you’d get from an NVIDIA GeForce RTX 3060 GPU at a more competitive price. And early review suggested they largely deliver on that promise… for newer games. But they struggled with some older titles.

Now Intel has released a driver update that the company says should bring big performance improvements for older games. The problem, in a nutshell, arrives from the fact that the initial graphics drivers were designed for games using Vulkan and DirectX 12 APIs. But since they weren’t optimized for older APIs like DX9, performance was underwhelming for some older, but still popular games like Counter-Strike: Global Offensive and League of Legends.

Intel says starting with its v3959 graphics driver, performance for DX9 titles should be much, much better. For example frame rates in CS:Go are twice as high with the new driver And while other games saw somewhat more modest improvements, Intel measured significant boosts in frame rates for titles including Stellaris, Starcraft 2, Guild Wars 2, and Payday 2 when playing at 1080p or 1440p resolutions. 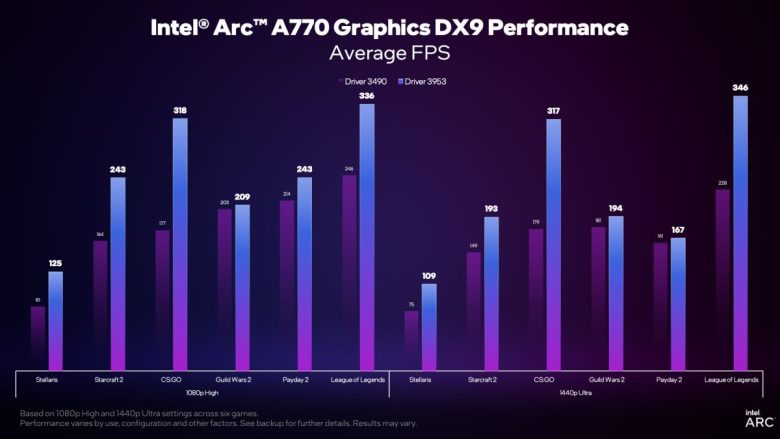 The company says the improvements come from “a combination of API techniques.” One of those appears to be the open source DXVK, which is an open source translation layer that Valve developed as part of its Proton software that allows Windows games to run on Linux PCs. In this case, Intel appears to be using the translation layer to allow DX9 games to use the Vulkan API.

In other words, Intel’s graphics cards still don’t have native support for DirectX 9. But they don’t need it in order to get better performance while running DX9 games.

Intel says the new graphics driver will also bring improvements to lower-cost, lower-performance products like the Arc A380 GPU which began shipping earlier this year. But the company hasn’t spelled out what kind of performance gains to expect from that entry-level solution.