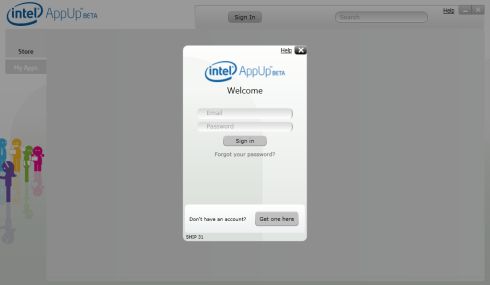 During his CES Keynote today, Intel CEO Paul Otellini announced that the company’s App Store for Intel Atom powered netbooks is now live. It’s called AppUp Center, and it lets you download applications for netbooks running either Windows or Moblin Linux, although as far as I can tell, only the Windows installer is available right now.

I’m not actually using a computer with an Atom CPU at the moment, and while I was able to install AppUp Center, I got a message stating that I can’t sign in or create an account because I’m not online — even though I am. It’s not clear at the moment whether this is because of my CPU or some other factor.

If you’ve had a chance to try AppUp, let us know about your experiences in the comments. Intel says the first apps that are available cover games, health, education, entertainment, and other areas. There should be a mix of free and paid apps.

Intel eventually plans to expand the app store to work with devices beside netbooks including smartphones, televisions, and other consumer electronics. Some netbook makers are expected to begin shipping PCs with the AppUp Center preloaded, but for now, you can download and install it yourself.