Intel’s Apollo Lake processors are set to hit the streets in the second half of 2016. They’re low-power, low-cost chips aimed at laptops, 2-in-1 tablets, and some desktop computers, and they’re the follow-up to the Intel “Braswell” processors we’ve been seeing over the past year in devices like Chromebooks, cheap Windows laptops, and mini-desktops.

So what’s the difference between Apollo Lake on Braswell? A few months ago Intel told us the new chips would offer better performance and efficiency. Now the company is providing some numbers. 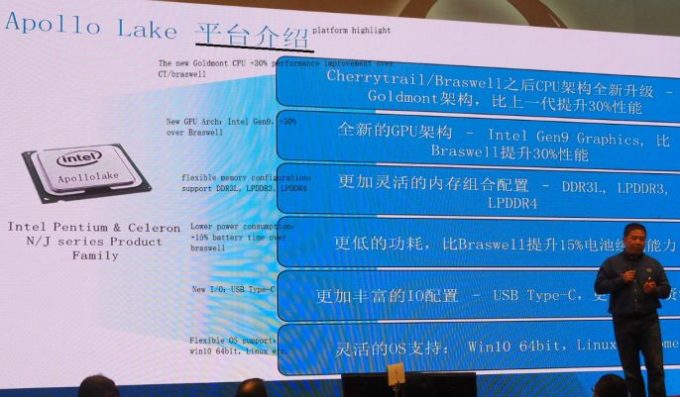 The new chips are based on Intel’s Goldmont CPU architecture, which replaces the Airmont CPU technology used in Braswell (and Intel Atom “Bay Trail”) chips.

AnandTech forum member Paul Jackson posted a slide from an Intel event this week at Computex, showing what we can expect from the move to Goldmont:

The slide also confirms that Apollo Lake chips will be branded under the Intel Celeron and Pentium N and J series, much like today’s Braswell chips. There’s still no word on an exact launch date, clock speeds for the new chips, or other details that will really help us figure out whether we can expect to see a 30 percent performance improvement in real-world conditions.