Intel and AMD are both pushing new technology that lets users run Android and Windows 8.1 on the same device without rebooting. AMD is doing that by partnering with BlueStacks, a company that’s been making software that lets you run an Android environment within Windows for the past few years. Intel, on the other hand, is pushing its own “Dual OS” solution that makes it possible to switch between operating systems with the tap of a button.

With the two biggest companies in the notebook processor space on board, it seems likely that the Asus Transformer Book Duet won’t be the only dual OS system launched in the coming months. 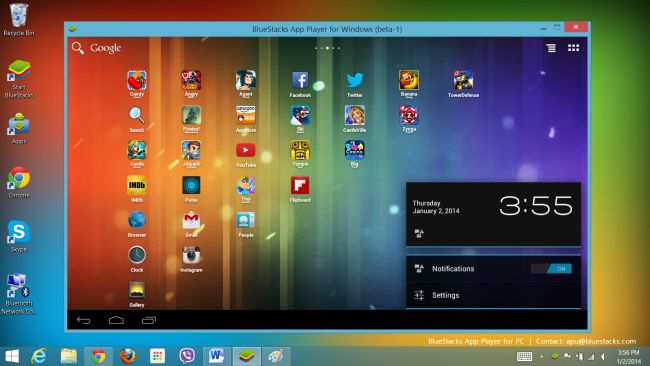 The ability to run Android apps on a Windows PC without rebooting means that users can access about a million touchscreen-friendly apps from the Google Play Store rather than the tens of thousands of apps available from the Windows Store.

It also means that if you have an Android phone or tablet, you can access the same apps and sync your data between your mobile device and your Android/Windows computer.

In some ways, this feels like a stop-gap solution. Either Windows will gain more touch-friendly apps in the Play Store or maybe one day Android will be a one-size-fits-all solution that can run instead of Windows on a laptop or convertible tablet.

Either way, I have a hard time seeing the dual OS solution as something users will be playing with 3 years from now. But it certainly seems a lot more useful than past attempts attempts to ship laptops with dual operating systems… which usually meant you’d have to wait for your PC to reboot before you could switch from one environment to the other.