Just a few months after launching its first Celeron and Pentium chips based on Bay Trail/Silvermont technology, Intel is starting to kill off chips such as the Intel Celeron N2810 and Pentium N3510 to make way for newer processors. 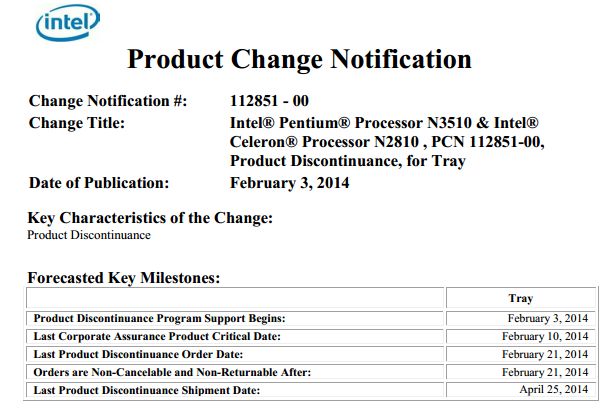 Intel’s Celeron and Pentium Bay Trail chips are aimed at tablets, notebooks, and low-power desktops and they’re based on the same architecture as the latest Atom processors, but generally offer more performance at the cost of slightly higher power consumption.

For the last few years the Atom line of processors for notebook, tablet, and desktop PCs has kind of stagnated, offering barely-noticeable speed bumps and modest improvements in efficiency. Bay Trail changed that by bringing Intel HD graphics performance to these low-power chips and dramatically increasing overall CPU performance.

While the Bay Trail-based Atom chips such as the Atom Z3770 and Z3740 aren’t going away just yet, it looks like first generation Bay Trail-based Celeron and Pentium chips will start to disappear in the coming weeks.

Here’s a rundown of the chips Intel will stop shipping in the next few months:

The models with N in the name are mobile chips for tablets and laptops, while the J series chips are desktop processors.

While Intel plans to launch next-gen “Cherry Trail” chips later this year, the processors that are being discontinued are already being replaced with next-gen Bay Trail chips that offer Burst mode for higher speeds as needed.