It took a few years longer than expected for Intel to make the move from 14nm to 10nm processors… and the company still hasn’t completed that transition. Only some 10th-gen Intel Core chips are manufactured using a 10nm process, while others are 14nm chips.

But according to a presentation slide from one of Intel’s partners shows the chip maker’s plans for the next decade, the company hopes to make the jump to a smaller node every other year for the next 10 years… eventually resulting in 1.4nm chips by 2029.

Update: Intel tells AnandTech that the slide is an altered version of one provided by the chip maker, which means the process nodes are more of an educated guess than an Intel timeline. 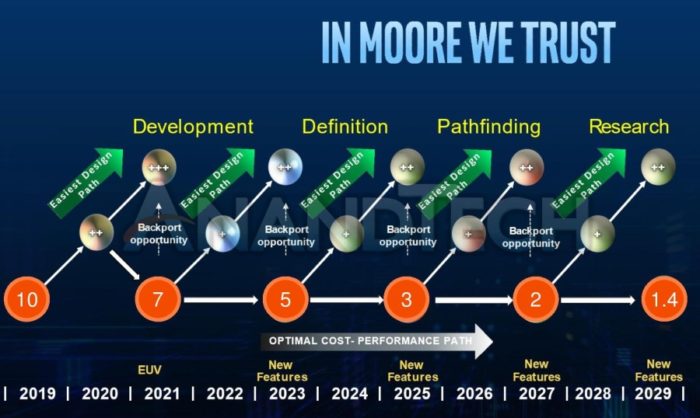 Generally speaking, the move to a smaller process node results in improved efficiency and performance.

Starting with the launch of its first 65nm chips in 2005, Intel was following a “tick tock” cadence, where the company would release a new family of processors using the latest fabrication process, followed by a next-gen family or processors that introduced a new architecture.

So every other year, the company moved to a smaller node… until it got stuck at 14nm.

Between 2014 and 2019, Intel released 5th-gen, 6th-gen, 7th-gen. and 8th-gen chips all manufactured on a 14nm node. Even Intel’s 10th-gen Comet Lake chips are 14nm processors. So far the only mass produced 10nm chips are the 10th-gen Intel Ice Lake processors, and there aren’t a lot of computers using them yet.

All of which is to say that while it’s interesting to see Intel’s plans for the next decade, it’s probably a good idea to take them with a grain of salt — it’s possible that Intel might not be able to meet its ambitious goals.

That said, the image above does show that there are also “backport” opportunities, where a processor that’s planned to launch as a 5nm chip, for example, could instead be released as a 7nm++ chip if it turns out that the company isn’t ready to ramp up production of 5nm processors yet.

So it looks like Intel has a contingency plan for any unanticipated delays.

Meanwhile, while Intel is just starting to ramp up production of its 10nm chips, AMD and many ARM-based chip makers are already producing 7nm processors. I wonder what they’re roadmaps for the next 10 years look like.

12 replies on “Intel aims to be making 1.4nm processors within a decade (Update: maybe)”