Intel is talking up its new high-performance (and high-price) X-Series chips at Computex. But while those chips should offer some serious compute power, they’re still based on the same architecture as existing Intel 6th-gen Core “Skylake” processors and 7th-gen Core “Kaby Lake” chips.

But the company is starting to talk  a bit more about the upcoming 8th-gen Core series of chips, code-named “Coffee Lake.”

While Intel hasn’t provided many details yet, here’s what the company is willing to say: they offer “more than 30 percent performance improvement” over 7th-gen chips. 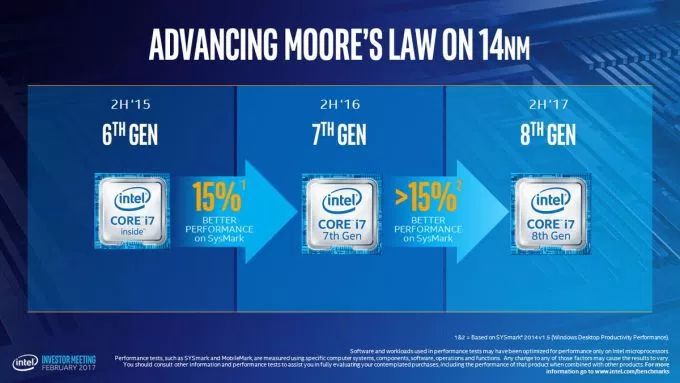 You should always take claims like that with a grain of salt, since Intel ran the benchmarks (including “performance tests, sych as SYSmark and MobileMark”) itself and may have performed optimizations ahead of time.

But while a 30-percent performance boost from one chip gen to the next is a pretty big deal, there’s at least one reason to believe Intel’s numbers: the company seems to be comparing a dual-core 7th-gen chip with a quad-core 8th-gen chip with support for higher clock speeds.

The comparison is fair, because both chips have 15 watt TDPs, suggesting that the new quad-core processor will occupy the same space in Intel’s Coffee Lake Lineup that the Core i7-7500U does in the Kaby Lake family.

Of course, doubling the number of CPU cores and threads only helps in tasks that are optimized to take advantage of the multicore architecture. While I suspect single-core performance will get a boost from the higher clock speed, the performance gains will likely be more modest.

FYI, here are some details for the two chip configurations Intel compared to get its 30-percent figure:

2 replies on “Intel: 8th gen Core processors are 30 percent faster (in some cases)”