Intel Says it’s on track to launch the first chips based on its 8th-gen “Core” technology in the second half of 2017.

Code-named “Coffee Lake,” the new processors are manufactured using a 14nm process, much like most Core series chips Intel has released since late 2014.

But Intel says its upcoming 8th-gen Core i7 processor will still offer a 15 percent performance boost over a 7th-gen Core i7 chip.

Update: I’ve seen some sites report on this slide as referring to upcoming chips codenamed “Coffee Lake,” while others say Intel is talking about “Cannonlake.” I reached out to Intel for comment and was told that the company isn’t ready to say anything more about it’s plans, but that it might be best not to think in terms of codenames for the upcoming 8th Gen Core family, which will cover a wide range of chips.


The original article continues below. 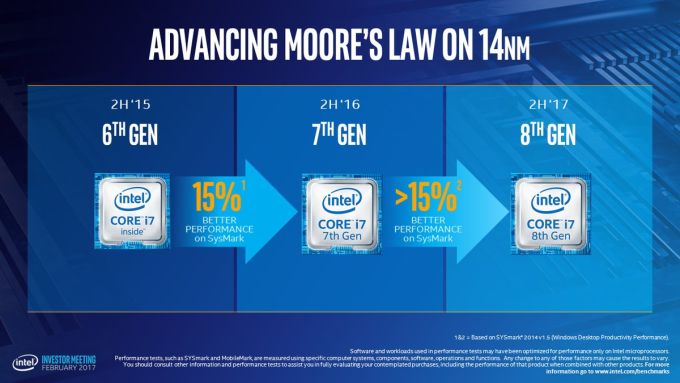 Intel does plan to move to a 10nm process for future chips, which should bring bigger boosts in efficiency and performance.

The first 10nm chips are expected to be part of a family that’s code-named “Cannonlake,” and according to a leaked product roadmap from last year, the first of those chips was slated to launch in late 2017.

But that same roadmap said the first Coffee Lake chips were coming in 2018, so it looks like the roadmap was either wrong, or it was subject to change.

Intel is also facing increased competition from AMD (with its new high-performance Ryzen chips) and ARM-based chip makers. So the company might be feeling some pressure to produce something new.

Intel CEO Brian Kraznich also announced this week that the company would continue construction of a chip manufacturing factory in Arizona, which had been on hold. The news came during a meeting with President Trump, although some have noted that plans for the facility have been underway since 2011 and it’s not clear what, if any, impact the election of Donald Trump had on decisions to move forward with construction of the facility.

What is clear is that the new facility is designed to help Intel move forward with production of 7nm chips which will hit the streets some time after the upcoming 10nm Cannonlake processors.