All of Intel’s modern processors have integrated graphics and most of the company’s recent chips can leverage that GPU for things like 4K video playback and even some gaming. But serious gamers, video editors, or cryptocurrency miners might still prefer a system with a more powerful discrete graphics processor.

Now Intel’s got a new line of chips that have discrete graphics integrated into the same package. As announced last year, the company worked with rival AMD on a new set of solutions that combine an Intel processor and AMD Radeon Vega M graphics.

Intel is launching those chips at the Consumer Electronics Show this week. There will be be five chips available at launch including 65 watt and 100 watt variants, and Intel says they’re all designed for use in laptops or mini PCs.

Dell, HP, and Intel are all expected to announce new products that use the chips this week. 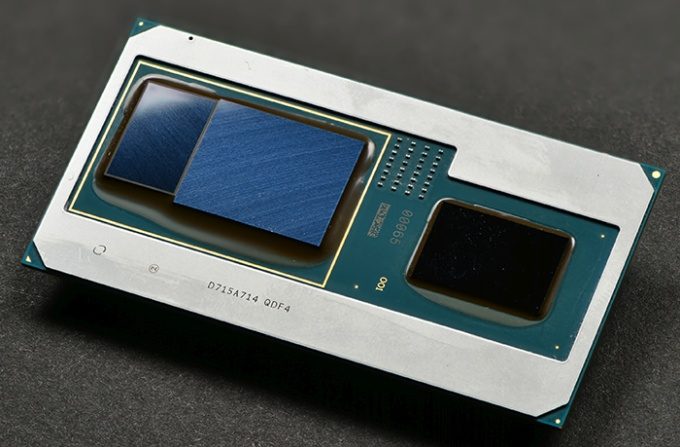 By combining the CPU and a discrete GPU on a single package, Intel says it’s able make a more energy efficient product that shares power between the two components to save power. That helps save on the electric bill, extend battery life, and reduce heat generation, allowing device makers to put the new chips into slim laptops. Intel says the processors are also just 1.7mm thick, which also helps.

The company says you save about 17.5 watts by combining components, and/or get the same performance as you would from a separate CPU and GPU while using 18 percent less power.

The new chips come in 65 watt and 100 watt variants, and they’re actually the first 8th-gen Intel Core H series processors, although Intel plans to launch more of these 45 watt quad-core CPUs in the future.

Here’s a run-down of some of the first chips in the series:

All of the new chips also feature Intel HD 630 graphics which can be leveraged for activities that don’t require the extra GPU. They all support dual-channel DDR4-2400 memory. And they can all power up to 6 displays, resolutions up to 4K/60, and they have native support for HDMI 2.0b with HDR10 and Display Port 1.4 with HDR.

There are some features are only available on certain chips. For example, the Core i7-8706G is the only model with Intel vPro support. And the Core i7-8809G is the only one with support for overclocking the discrete GPU.

So are you better off getting a laptop with an 8th-gen Intel G-series processor or a model with a separate discrete graphics chip? 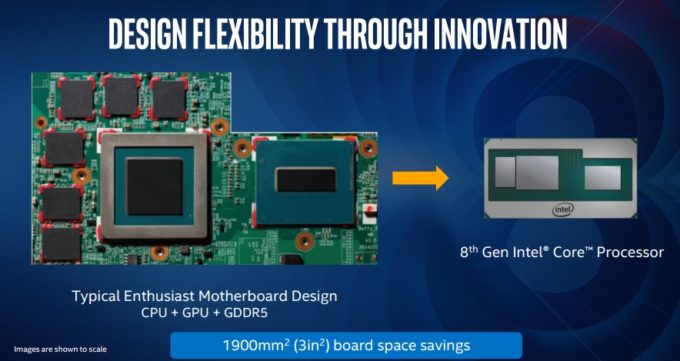 That probably depends on the system, but here are a few data points Intel is offering. Compared a system with an Intel Core i7-8550U processor and NVIDIA GTX 1050 graphics, a system with an 8th-gen Core i7 chip and AMD Radeon RX Vega M GL graphics gets frame rates between 1.1x and 1.4x better in games including Hitman, Vermintide 2, and Deus Ex: Mankind Divided.

Compared with a 3-year-old machine with a Core i7-4720HQ chip and NVIDIA GTX 950M graphics, Intel says its new chips score between 2 and 3 times faster in gaming benchmarks, and they can transcode video using Handbrake nearly 7 times more quickly.

We’ll probably have to wait to see some real-world, third-party tests before we an verify those results. But things look pretty promising so far, especially if you can achieve those results while using less power.

Oh, and all those scores mentioned above? They’re for Intel’s new 65 watt chips.

The company says its 100 watt chips with Radeon Vega M GH graphics can outperform a computer with an Intel Core i7-7700HQ processor and NVIDIA GTX 1060 graphics by a small margin.

Intel says we should start to see the first computers featuring the new processors starting this spring. Among other things, Intel expects to see thin and light notebooks, 2-in-1 computers, and mini PCs.

In fact, Intel is making its own mini PC with a G-series processor. The company plans to launch a follow-up to the Intel Skull Canyon NUC featuring the new chips soon.