Intel’s 12th-gen Core “Alder Lake” processors brought a hybrid architecture to the company’s desktop and mobile chips. By combining Performance and Efficiency CPU cores, we ended up with chips featuring up to 16 cores and 24 threads.

But Intel may push things even further with its upcoming 13th-gen Core “Raptor Lake” chips. According to leaked slides published by Igor’s Lab, we can expect Intel’s next-gen desktop processors to feature up to 24 cores and 32 threads, among other improvements. Update: Intel accidentally confirmed some of those details a little ahead of schedule. 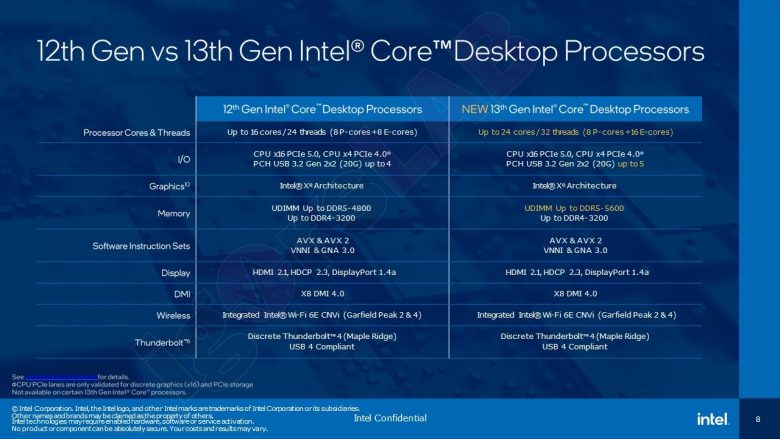 A week after Igor’s Lab published leaked slides, a blog post on Intel’s Canadian website about choosing a CPU for gaming showed up with details about three Intel Raptor Lake desktop processors:

Intel has since updated that blog post with references to 12th-gen chips based on Alder Lake architecture rather than 13th-gen Raptor Lake processors. But not before some folks saved screenshots of the original page.

Those specs are in line with the details leaked by Igor’s Lab, suggesting that the information is legitimate. With that in mind, it looks like top-of-the-line desktop chips will still have just 8 Performance cores with support for hyperthreading, which means you’ll get 8 high-performance cores with 16 threads. But instead of 8 single-threaded energy-efficient cores, Raptor Lake chips will be available with up to 16 Efficiency cores.

That could lead to stronger multi-core performance, although it’s unclear what, if any impact, we’ll see on single-core performance. But Intel is promising at least some improvements thanks to faster L3 smart cache for Performance cores across all models, as well as more L2 cache for Intel Core i5K and higher chips.

According to one of the leaked product slides, Intel’s most powerful Raptor Lake chip at launch will be the Core i9-13900K with support for speeds up to 5.7 GHz under some circumstances (although Efficiency cores top out at 4.3 GHz).

The chips are power-hungry though, with all of the 13th-gen Intel Core i5, Core i7, and Core i9 desktop chips shown in a slide expected to have a 125 watt processor base power and maximum turbo power ratings ranging from 181 watts (for Core i5 chips) to 253 watts (for Core i7 and higher).

Intel is  to officially launch its Raptor Lake processor family on September 27th, so we don’t have long to wait to find out if these leaked specs are legit.

This article was first published September 8, 2022 and most recently updated September 13, 2022.