Android has a baked-in tethering feature for a while, allowing you to use your phone as a WiFi hotspot so you can use your mobile data with your laptop, tablet, or other devices. But you have to set up a hotspot and connect to it manually, and who has time for that?

Now Google is starting to roll out a simpler solution called “Instant Tethering.” 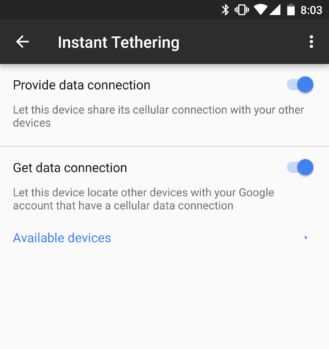 First spotted by Android Police, Instant Tethering allows any device connected to your Google account to share its cellular connection or look for cellular connections on other devices. That way if your tablet loses a signal, for example, it can automatically search for your phone, tell it to turn on tethering, and share the network connection.

The new feature is baked into Google Play Services 10.2, and it’s rolling out initially for some Nexus and Pixel smartphone users before launching more widely.

Right now Instant Tethering seems to be Android-only. But I wouldn’t be surprised to see it baked into Chromebooks in the future, especially since the latest builds of Chrome OS include an Android subsystem. There’s no word on if or when you’d be able to tether a Windows, Mac, or Linux desktop to a smartphone using this sort of system, but you can still set up a mobile hotspot manually on most Android phones…. assuming your carrier doesn’t restrict that feature.