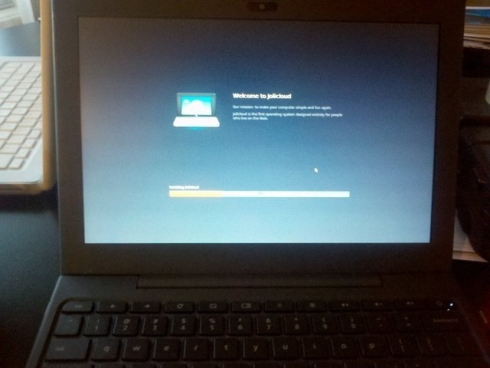 Google Chrome OS is an operating system based around a web browser, designed to almost make the computer irrelevant by letting you run web apps, store your data in the cloud, and easily access your settings and information from any machine with a web browser. Jolicloud is a Linux-based operating system that works much the same way, but also lets you download and install desktop apps if that’s the sort of thing you’re inclined to do.

While Google is clearly the bigger name company, Jolicloud has made a bit of a name for itself over the past few years by focusing heavily on the netbook space. But what if you want to install Jolicloud on a notebook specifically designed for Chrome OS? It turns out there’s an app for that.

Actually, the app is Luigi — the same tool that lets you install nearly any operating system on a Google Chrome Cr-48 laptop. But Danny Peck has put together step-by-step instructions specifically showing how to install Jolicloud on the Cr-48. The whole process takes about 15 minutes, (assuming you’ve already downloaded Jolicloud).

Since  the Cr-48 was designed for Jolicloud, you have to take the notebook apart and flick a switch to enable developer mode so that you can change settings and install other operating systems. From there, the process is actually pretty straightforward — and pretty easy to reverse.

Peck reports that it’s a bit difficult to use the Cr-48 touchpad to click and drag text in Jolicloud, but aside from that the hardware seems to fully support the operating system.

The Google Cr-48 laptop isn’t available for purchase, but Google is still giving away some units as part of a pilot program. You can apply for one at the Cr-48 web site.