The Zealz GK802 is a little device about the size of a chunky USB flash drive. But unlike a flash drive, the GK802 is a fully functional little computer with a quad-core CPU, 1GB of RAM, and 8GB of storage. It ships with Google Android software, but it can also run Ubuntu and other Linux-based operating systems.

Now there’s an easy way to install Linux on the GK802. 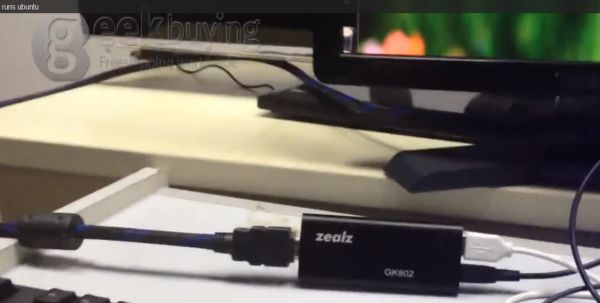 Retailer Geekbuying sells the GK802 for $100, and the store has received a beta build of Ubuntu 11.10 for the device. This week Geekbuying made the software available for download.

If you’re wondering what to do with that software though, ARMTVTech’s deadhp1 has a few good ideas.

He’s put together a disk image which you can write to a 4GB or larger microSD card using a Windows or Linux computer. Once you’ve prepared the card, you can insert it in the GK802 and reboot the device to load Ubbuntu.

The software supports hardware accelerated video decoding, but that doesn’t mean everything is smooth sailing. Deadhp’s had problems getting WiFi to work, for instance.

One of the key things that sets the GK802 apart from other ARM-based mini computers is the fact that it’s powered by Freescale’s quad-core i.MX6 processor. Since Freescale offers documentation and support for Linux, it’s easier for developers to port Linux-based operating systems to this chipset than to some others.