Still have an iPhone 3G or an older iPad or iPod touch lying around, but find yourself unable to install modern apps because the latest versions aren’t compatible with the version of iOS running on your device? Apple’s just updated the App Store to let you download older versions of apps.

For instance if you have a second generation iPod touch, it won’t be able to run any operating system later than iOS 4.2. So now you can download the last version of many apps that were known to work with iOS 4.2 on that iPod touch. 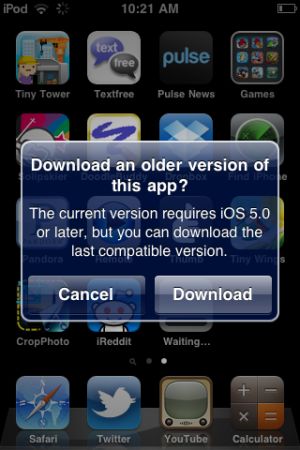 The move comes just before the launch of iOS 7, Apple’s latest mobile operating system. While iOS 7 will ship on the latest iPhone models and it’ll be compatible with some recent iPhone, iPad, and iPod touch devices it’ll also leave some older hardware behind.

The good news is that this means older devices may continue to stay useful for a bit longer. The bad news is that developers don’t just update apps to make the compatible with newer versions of the operating system. They also deliver bug fixes and new features in updates — so if you’ve got an older device you’ll be able to continue downloading apps, but you won’t necessarily get everything offered in the latest versions.