Smartphones with Android 5.1 software are starting to ship in Indonesia, even though Google has yet to officially announce the latest version of its mobile operating system. Earlier this month Google expanded its Android One program to include Indonesia and the Philippines, and the official website made multiple mentions of Android 5.1.

Now that some folks have gotten their hands on these low-cost phones with stock Google software and hardware that’s been vetted by Google, independent developers have figured out how to take the software and load it onto other devices.

For now that means if you have an Android One phone that’s not yet running Android 5.1 you can update it manually without waiting for Google to roll out an official software update. 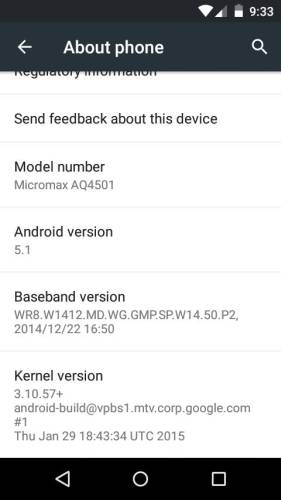 You’ll need an Android Phone phone such as the Spice Dream UNO, Karbonn Sparkle V, or Micromax Canvas A1 and you’ll need a custom recovery on that phone. You’ll also need to be willing to wipe all data from your phone, so make sure to backup any important files before beginning and you might want to completely back up your device in case you want to go back to Android 5.0

It’s still not exactly clear just what’s new in Android 5.1 — for the most part it seems like the update is designed to fix bugs and improve performance, particularly on low-end devices like phones that are part of the Android One initiative.

There is at least one new feature — you can now tap an arrow next to the WiFi and Bluetooth icons in the Quick Settings pull-down panel to choose your network or devices.

There are also new animations in the clock app which show up in the icons when you switch between clock, alarm, timer, and stopwatch.

Folks who have devices other than an Android One phone will probably have to wait a little while to get Android 5.1. Google hasn’t yet released the source code for the operating system or ROMs for any other devices.

But now that a system dump and stock ROMs based on the latest version of Android are available for some devices, it might not be long before we start to see features like the new wireless settings toggles in custom ROMs from third-party developers.