The Intel Compute Stick is one of the smallest full-fledged Windows computers you’re likely to find, and it offers decent performance for basic computing. But the pocket-sized PC suffers from a few limitations: It has just 32GB of storage space, features only a single USB 2.0 port, and has limited WiFi range.

But the Intel Compute Stick isn’t the only tiny desktop PC on the market. The folks at the UK-based Stick PC Store wrote in to let us know about a new model that has twice as much storage space and twice as many full-sized USB ports. 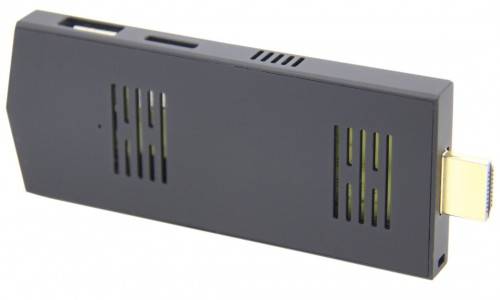 The Stick PC Store plans to begin selling the little computer soon for $260. Note that this is the UK-based price, which is pretty high thanks to taxes and the strength of the British pound. Stores in other markets might eventually be able to offer lower prices, but if you don’t want to wait that long, the Stick PC Store does offer international shipping.

Update: Looking for a cheaper option? Notebook Italia notes that the APM-D05 appears to be based on the same design. It has just 32GB of storage, but the APM-D05 does have two full-sized USB 2.0 ports and the TV stick is a lot cheaper than the Innovatech T-0264W. You can pick one up from AliExpress for around $100.

This Innovatech T-0264W measures 3.9″ x 1.5″ x 0.4″ and features an HDMI connector on one end. Plug it into the HDMI port on your TV or monitor, connect a power source, mouse, and keyboard, and you’ve got a full-fledged Windows desktop computer.

There are three key features that set this little guy apart from the Intel Compute Stick:

Like Intel’s mini-computer, the Innovateck T-0264W draws power from a cable plugged into a micro USB port. But there are two full-sized ports which you can use to connect a keyboard and mouse at the same time without relying on a combo unit like the Logitech K400 or Bluetooth accessories.

Alternately, you could use a Bluetooth keyboard, mouse, or remote control while using the USB ports for flash drives, game controllers, printers, or other accessories.

Note that the Innovateck T-0264W is a low-power device that might not be able to crank out enough juice for some accessories that draw power over USB.

With 64GB of eMMC storage, there’s more room for apps, media, and other files. You can also add up to 128GB of removable storage thanks to a microSD card slot.

Finally, the audio jack makes it easier to connect speakers, headphones, or a microphone.

Other features for the Innovatech T-0264W are pretty much the same as for the Windows version of the Intel Compute Stick, including an Intel Atom Z3735F Bay Trail processor, 2GB of RAM, and Windows 8.1 software.