Great news for any low-RAM Windows Phone owners out there. Microsoft Engineering General Manager Gabriel Aul let slip via Twitter that the initial Windows 10 Technical Preview will support (at least some) 512MB devices.

We are still waiting to find out the official list of supported devices for the first preview. However, when asked, “Can you at least confirm that one of them will be 512MB ram device?” Aul responded, with faux reluctance, that there will be 512MB device support.

@Qushery @NicholasHayman Hmmm. Do I cave? Don’t think you can squeeze anything ELSE out of me:-) Yes, we’ll have 512MB devices for 1st prvw.

His confirmation is vague, to say the least. We don’t know which low-RAM devices will support Windows 10. There is also a good chance that, while the first preview can run on them, later builds (and more importantly, the final product) might not. 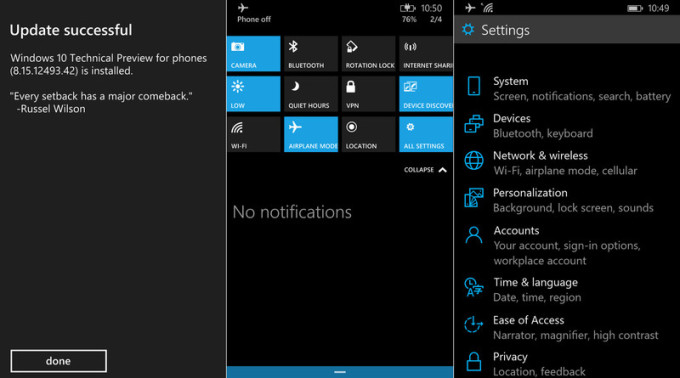 In other Windows 10 for mobile news, a couple of screenshots have surfaced of a Windows phone running the Technical Preview. The pictures show off an updated action center, settings section, and a quote from Seattle Seahawks Quarterback Russell Wilson – “Every setback has a major comeback.”

Last month, Microsoft announced that Windows 10 would be a free upgrade for PC, notebooks, tablets, and phones. The company hopes to unify mobile and desktop computing with a more universal look across all devices. The company has already announced that Windows 10 will run on the majority of Lumia phones. We are just waiting to see what other mobile devices can handle the new operating system.