Say you’ve got a laptop with just one or two USB ports, but you want to plug in a mouse, a smartphone, a flash drive, and an optical disc drive. You could invest in a USB hub.

But the makers of InfiniteUSB have another idea. They have a line of USB cables that are also USB ports. Plug one cable into the USB port on your computer and there’s a port in the back which you can use to plug in another cable… and another one… and another one. 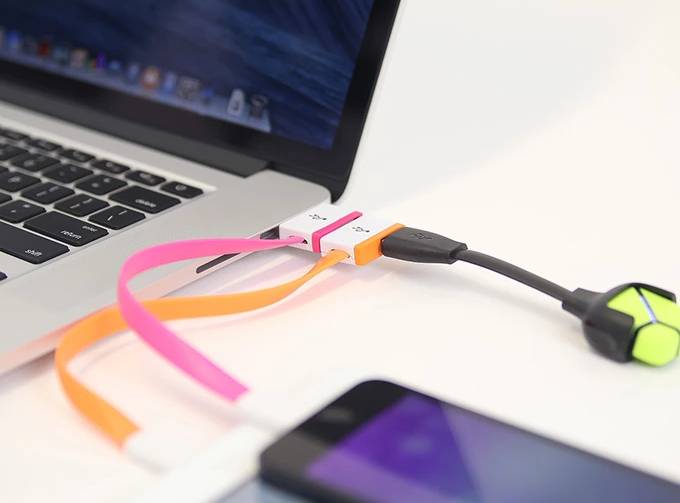 The product has already been designed, but the developers are seeking money to mass produce InfiniteUSB cables through a Kickstarter campaign.

A pledge of around $20 (give or take, depending on the reward levels that are left when you read this) reserves an InfiniteUSB Kickstarter Special Edition cable which should ship in July.

Update: Don’t want to pay $20 or wait until July? As Anon points out, there’s a similar product on the market already. it’s called the Tripp Lite USB Port Liberator, and it’s a USB 2.0 cable with a port in the back. It’s a less colorful option, doesn’t include magnets, and there’s no Lightning adapter option. but it’s available now for as little as $5.

The team plans to manufacture three different models at launch: one with a micro USB connector on one end, another with a Lightning connector, and a third with a female USB adapter. All three are relatively small adapters which are designed to connect to one another, and which include magnets that make it easy to fold up the cable when its not in use.

Want to add extra ports to Apple’s new single-port MacBook? You might need to wait a little longer. Work on a USB-C version of InfiniteUSB is underway, but that model won’t be available at launch.